Just My Type is a slash vampire anthology with two issues. There was a third one of mostly Buffy stories planned for 1999 Media*West, but it didn't get off the ground. 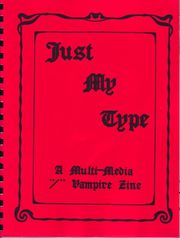 Just My Type 1 has the subtitle --A Multi-Media Vampire Zine.-- It was published in 1993 and contains 187 pages. Note: the cover shown here isbe a later edition; there is a an original edition with an cover by Phoenix. 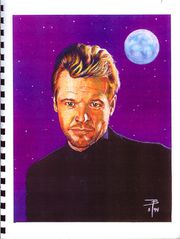 Just My Type 2 was published in 1994 and contains 190 pages. Judy Breuer is the front cover artist.