Summary from a distributor, Agent With Style: "From tears to joy and everything in between, Christmas with the Winchesters could never be considered ordinary. These deftly-told tales will pull you into the lives of Sam and Dean, how they celebrate the holidays -- or not, as the case may be. With surprises around every corner, you'll never want these stories to end!" 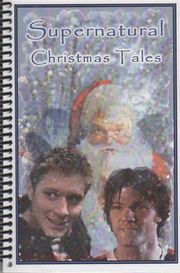 Supernatural Christmas Tales 1 was published in 2007 and contains 102 pages.