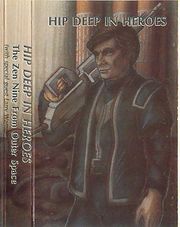 Their music was turned into another filk series for the Galaxy Rangers TV show:

"Many Thanks to the Zen Nine and their tape "Hip Deep in Heroes." That's where I got a lot of the tunes for these. The Zen Nine are a branch of the LA Filkharmonic who specialize in songs about Blake's 7. The fact that songs about the Liberator Rebels can be so easily be turned into songs about the Series Five Rangers SHOULD scare me, but when I think about it, I have to wonder if Robert Mandell watched Terry Nation and took notes."[1] 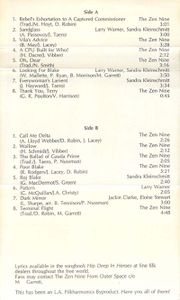 These filks, and more, were printed in Hip Deep in Heroes. See that page for much more about the filks.

One Was Used In a Fan Vid

Sandglass lyrics (to the tune of "Mary O'Meara"), excerpt from one of the filks used by Carol McCoy to make a Servalan/Tarrant fanvid:

Servalan's lover is a corpse in the back room
Dead men tell no tales, so they say
The sand outside windows is drifting higher
Whispering that we must stay
Our last hour is passing away

"This one is slightly more pop orientated, there are a few good songs but I don't enjoy it as much as Linda Short's tapes. Basically it depends on your taste in music."[2]

"..."Hip Deep in Heroes" is also quite excellent. It is done by a group of male and female singers/musicians who call themselves the "Zen 9 from Outer Space." They have a good range of voices in the group, and try to match the voices to the character(s)singing the songs, with great success. They use multiple musical instruments and have a more balanced "real band/musical group sound." The album was done in 1990, in California. Favorites include:

"Pattern" - Avon sings, apparently over Blake at GP, contemplating his inescapable link to Blake, and its determination of Avon's Fate. I love it when Avon talks about Fate.... I especially love the last line in which Avon questions whether, in fact, it is Blake who has really forced him to be the way he is, or if he was always that way himself.

Oh, I have walked Blake's Pattern, although why I used to wonder
From blue Earth to Cygnus Alpha, as my life was pulled asunder
My life's no less beleagured now than it has been before
And I cannot tell who's with me, or against me, any more

My old friends were all criminals, and they must have thought me crazy
They'd no consciences to speak of, and their morals vague and hazy
But then who am I to try to put their actions to the test?
As I stand here, gun in hand, and memory will not give me rest

Yes, I have walked Blake's Pattern, to this world where it has ended
A more certain, bloody, finish, than even Servalan pretended
When on Terminal, I saw him, there was nothing there to see
But a shadow born of shadow from my shadowed memory (Umm, I love this line!)

So long I trod the Pattern, by my enemies surrounded
And no matter where I traveled, escape was 'ere confounded
I cursed you and your Pattern, Blake, for what you did to me
Even after we were parted, still, it would not set me free

I was caught up in Blake's Pattern, barely knowing I was losing
A future for my own life, and a Fate of my own choosing
Was this thing I've done predestined by that Pattern's grip on me
Have I become the Pattern, or was the Pattern always me?

"A CPU Built for Two" - A parody of "A Bicycle Built for Two," spot-lighting everyone's favorite obnoxious box of circuits Orac.

There's a computer on board our ship, smart, but cranky
Made from the latest in logic chips, plastic, and blinking lights
We're not too sure that we like him much, sometimes he's hard to take
Still, he is better than lots of things brought on board ship by Blake

Orac, Orac, give us your answer, do
One more wisecrack, and we might get rid of you
We need secret information, about the Federation
So please relate what dangers wait for the (something) Liberator's crew

Orac, Orac, give us your answer, do
Don't you talk back, we've got a job for you
The teleport needs attention, and timely intervention
To save our friends, from nasty ends, bring them back and make coffee, too

There's a computer on board our ship, smart, but cranky
Still, he is better than lots of things brought on board ship by Blake

Orac, Orac, give us your answer, do
Don't get sidetrackked, or power goes off for you
We don't trust your wild predictions, they sound like science fiction
Just do your job, don't be a snob, we've got Avon for that, it's true

Orac, Orac, give us your answer, do
One more wisecrack, and we might get rid of you
We're canned up by cancellation, so call up Terry Nation
And please relate what dangers wait for the (something) Liberator's crew

And please relate what dangers wait for the (something) Liberator's crew

"Roj Blake" - A description of Blake, presumably by some generic rebel recounting his legend.

I met a man called Roj Blake, in a city in a dome somewhere in the future
He'd been erased and redrawn but now he holds the pen
He stole a ship with his friends, his followers may number as many five,
Or seven, it depends on how you count the machines, and . . . who's dead

A hero, and a terrorist, he wants to destroy Control
To bring down the Federation, though, he doesn't know what will replace it
His eyes are set on this single passion, to see it through, whatever the cost
To Jenna, or Gan, or Kerr Avon

I knew this man Roj Blake, I saw his dreams come true, but they destroyed him
Shot him down like Star One, and yet
I suppose, that one could say, he's never known true peace of mind . . .
Till now

Also on the album is "Dark Mirror," a heinously evil song which relates Servalan's scheme to totally subjugate Avon's mind, soul and body to her will. Very dark. Plays on the grayness of Avon's morality. Sung from Servalan's point of view. She intends to kill that last flickering spark of goodness and light in him. Shiver.

There is also "Looking for Blake," to the tune of "Looking for Love in all the Wrong Places," - hysterically funny. Sung from Avon's point of view. And "Sandglass," a beautifully sung male-female duet sung from the point of view of Tarrant and Servalan on the planet in "Sand." There is also "Everywoman's Lament." Ever wonder where that songvid of Vila trying to get into Blake and Avon's leathers, done to the music of "Knights in White Satin" with different words (fannish women at large, trying to get into Avon's leathers) came from?? Well, this is it."[3]

My personal introduction to filk came via my favorite fandom, "Blake’s 7." When I first discovered this British science fiction show, I had very little willpower: if something had the name "Blake’s 7" on it, my money was gone. I soon found myself the proud owner of an extensive collection of "Blake’s 7" books, magazines, and mediazines. In the midst of this buying frenzy, I purchased an audio cassette called Hip Deep in Heroes. I honestly did not know what to expect.

What I received was a tape of sixteen filk songs based on my favorite BBC television series. It’s a wonderful tape, but requires some familiarity with the show to be fully appreciated. So, I stayed far away from other filk tapes, fearing I would not comprehend or enjoy songs inspired by other fandoms." [4]

...a few weeks ago I ran across something I'd like to share with other B7 fans -- an audio cassette called "Hip Deep in Heroes," folksongs performed by The Zen Nine from Outerspace. Now, I don't know who these people are -- I don't own this tape. But my sister played if for me several times over the course of a weekend. She bought it at either WindyCon or Capricon (Chicago, IL science fiction conventions).

Most of the songs were set to familiar tunes, and in several cases knowing the original song made the filk version that much more appropriate. There was a nice mix of serious and comic; the sound effects during the musical bridge of "Everywoman's Lament" (aka Studs & Leather) were priceless! My favorites, I think were "Sandglass" (tune Mary O'Meara), the ORAC song and the last song on the tape, appropriately titled "Terminal Flight." But all the songs were enjoyable. I think there was only one I didn't recognize the tune, and that one may have been an original.

If anyone knows any more about this tape, I'd like to hear from them! I'd like to know how to get my own copy (a sparkly of my very own!) and also if these people are planning another tape. The instrumentation was near professional quality (from what I could tell). I know there are a lot of filkers in B7 fandom (including me), and I'm sure they can all appreciate the time and effort that goes into making a tape. [5]

I worked on the tape, and while I know it's not (quite) faultless, it has a lot of very enjoyable music. Believe me, after you've sung something a hundred or more times, you know if it's enjoyable! [6]