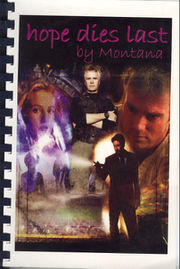 Hope Dies Last is a het and slash Stargate SG-1/X-files 154-page novel by Montana. Pairings are Mulder/Scully and Jack/Daniel.

From the publisher: "Shortly after the Truth, Scully disappears and Mulder turns to an old friend to help find her. Along the way he meets Dr. Daniel Jackson and Colonel Jack O’Neill and must join them in the fight against a group of aliens trying to change Earth’s future in order to get Scully back."

""Hope Dies Last" is a slash Stargate SG1 X-Files crossover novel by Montana. I bought this novel at Mediawest in 2013 from Ashton Press. Montana is a prolific artist and her work has appeared in many fanzines and the art show at Mediawest. It is featured on the covers of this fanzine as well as other Ashton press zines. Her art is wonderful and certainly adds to the zine.

Now normally, I would not buy slash fanzines, however, Annie was nice enough to let me peruse the fanzine at her table. It contains two of my favorite fandoms: Stargate SG1 and The X-Files. I really like Hurt Comfort and Daniel and Mulder are eminently HC'able (is that a word?). As I was perusing, I discovered that there was a wonderful story with lots of hurt comfort and angst.

The story and characters: Scully disappears from Mulder's existence and he seeks out the help of SG1 to find her. This is a post Meridian story, but it does not dwell on the angst and sorrow of the rest of SG1. In fact Daniel tries to help in every way he can. I believe Montana has captured the essence and heart of the characters and seeing them interact is a delight. I could see and hear Mulder arguing with Scully, and Jack getting fed up with Daniel. Mulder and Jack have to work together to find Daniel and Scully, which works well.

The art: The front and back cover are beautiful collages from X-Files and Stargate. Annie included one of Leah Rosenthal's hilarious cartoons, but I am not sure that could be called art. (Just kidding).

The slash part. This is a slash novel and it does have a sex scene. The slash relationship does appear, and is an integral part of the story, but it is not offensive and the slash scene is skippable if you prefer. Or deliciously readable, depending on your point of view.

I would highly recommend this zine to Stargate and X-Files lovers, even the gen ones."[1]