Shadow at the Edge 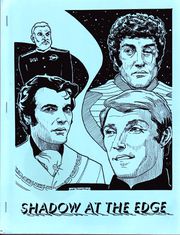 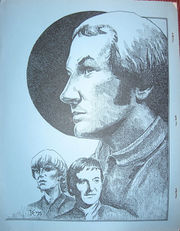 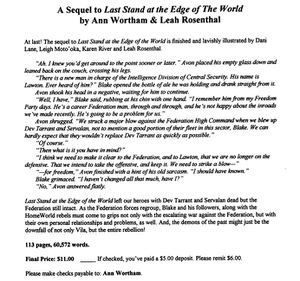 a 1995 flyer, zine's title is not mentioned. Perhaps it didn't have a title at the time of this flyer's printing?

Shadow at the Edge is a gen Blake's 7 114-page (60,572 words) novel by Ann Wortham and Leah Rosenthal. It has a front cover by Leah Rosenthal, a back cover by Karen River and interior art by Leigh Moto'oka, Dani Lane and Jane Mailander. It includes a poem by Mailander called, "The Lion and the Fox Cub."

It is a sequel to Last Stand at the Edge of the World.

Last Stand at the Edge of the World left our heroes with Dev Tarrant and Servalan dead but the Federation still intact. As the Federation forces regroup, Blake and his followers, along with the Home World rebels must come to grips not only with the escalating war against the Federation, but with their own personal relationships and problems, as well. And, the demons of the past might just be the downfall of not only Vila, but the entire rebellion! [1]

I'm currently very happy with what we've done in the sequel to LAST STAND AT THE EDGE OF THE WORLD, principally because I figured there wasn't much left to be said or done after the first novel, and I was pleasantly wrong. [2]

"This is the long in coming sequel to their novel LAST STAND AT THE EDGE OF THE WORLD. This is still set in the gen universe, but it doesn't completely rule out the slash aspects since, like the first novel, several people speculate on the nature of Avon and Vila's relationship and this also has a reference to one of the adult stories published in SOUTHERN COMFORT 4.5. Unlike the first novel, this gives us many more questions than answers, but it does have several things going for it. One is that, going against B7 tradition that Avon have the most dysfunctional childhood and family of anyone ever, Vila seems to be bearing the brunt of anti-Family Circus storyline. Don't get me wrong, Avon is hardly the most stable person in this storyline and in the original novel he certainly lived up to tradition in that case, but the authors seem determined that Avon not be alone in this this time. More is found out about Vila's past and why he drinks and we even get to meet a family member along the way. Another thing that it has going for it is the appearance of Carnell, the psychostartegist (sic). He is now working for Blake, helping the revolution along and being highly amused by everything around him. The only truly frustrating thing about this zine is that there are more questions at the end of the zine then answers and while I think that it's worth the price of the zine, it doesn't really seem to go that far forward by the end of the story. Btw, though, they have said that they are already working on another novel in this universe and some more of the slash stories as well. I think the whole zine might be worth it, though, just for the Leah Rosenthal cartoon on the last page titled, "Down and Out at the Edge of the World... SHADOW AT THE EDGE, while worth the cost is probably going to be much better once there is something after it. I see it as probably being more valuable as a link. Don't remember the cost of it and the info isn't listed on the flier in the back. [3]

[Four out of ten stars] I embarked upon this sequel with high expectations, having so much enjoyed 'Last Stand at the Edge of the World'. I was sorely disappointed.

If this were a commercial production -- rapidly produced in a fraction of the time it took to create the original, low on content, stiff with references to the past, and evidently intended as the set-up for a tie-in series -- the word 'franchise' would rapidly rear its head. Since the writers aren't intending to make a profit out of it, I can only assume that they failed to observe they were flogging a dead horse.

In a way, this is a caricature of its predecessor. All the potential flaws that 'Last Stand', by and large, side-steps so successfully, here reveal themselves for the traps they are. Perhaps the most iniquitous is the resurrection of a character at the expense of one of the most effective scenes in the previous zine: perhaps the most self-indulgent is the introduction of the insufferable psycho-strategist Carnell, complete with eulogy to the length and thickness of his eyelashes. (One of the few gems of dialogue I appreciated: "There's no need to blame yourself." "I *don't* blame myself," Avon maintained, stopping himself from strangling Carnell solely by sheer force of will. "I blame *you*.")

Avalon, Lindor, Tyce and the Terra Nostra all get an obligatory reference, and the whole plot essentially revolves around 'Vila needs psychotherapy' plus various complications to rebel love-life. This is Blake's 7 as soap-opera... as the other zine so easily could have been, and wasn't.

The original was five interlocking stories, each building on what had gone before and coming to its own completion. This sequel is a single, rambling narrative that feels much shorter and slighter -- I zapped through it in a couple of hours, with no real incentive to stop and savour -- and with no satisfactory ending. The foreword promises "we're already hard at work on the next novel in the 'Edge' series", and this is presumably a hook into it... if it ever appeared. (I'd heard of this one; I never heard of any further sequels.) At any rate, it failed of its intent to make me eager to buy the follow-ups. I was thoroughly disenchanted.

To add insult to injury, this zine is far more clumsily written. The 'party' scenes on Space City -- including the jacuzzi(!) -- are particularly bad, but the dialogue is generally more stilted overall. It's hard to be sure why. Frankly, it's hard to be sure it's even the work of the same authors; it reads like a well-intentioned attempt at homage, a fanfic of a fanfic. (And who *is* the Elvis Presley clone on the front cover? Not Colton, yet another would-be villain with a family vendetta, since he's described as 'sandy-blond' on the opening page....)

If you liked 'Last Stand at the Edge', I would really recommend avoiding this one. It only detracts from its predecessor. [4]