Issue 1 ("The Flotsam Chronicles" and "Out of the Night") 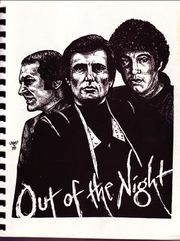 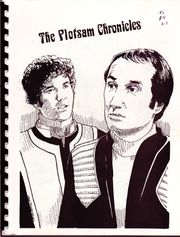 "Gauda Prime was a fearsome planet as far as Vila was concerned, and when even the trees turned against him, he knew that it was long past time to leave. But where to go following the monumental disaster that had befallen the Scorpio's crew there on G.P.? The salvage ship Delta Horizon provides the perfect answer when he and Tarrant are forced to stow away and learn that the ship's captain is in desperate need of help. Never one to turn away from someone in need (especially when they were desperately in need of some help themselves!) Tarrant and Vila "persuade" the captain to take them on as partners. Of course, when could those two ever stay out of trouble for long? And what of the rest of Scorpio's crew..not to mention Sleer?"

“Out of the Night” by Annita K. Smith. Illustrated by Celeste Hotaling. Cover by Laura Virgil.

"Only Avon and Vila seem to have survived Gauda Prime, and they soon learn that Servalan has “plans” for them. A desperate bid for freedom goes awry and, although they escape, Vila is mortally wounded. With only the option of returning to Gauda Prime left to him, Avon decides to stay with their failing ship as the air slowly runs out and Vila bleeds to death...but rescue comes from a most unexpected quarter. And, in the end, not all was as it seemed at Gauda Prime and other places, as well. Could it be, by some trick Fate, that Blake~and the others—survived Gauda Prime, after all?"

Two sequels to this story, "Precious Vengeance" and "The Treasure Outside the Door", were published in Southern Seven #8. 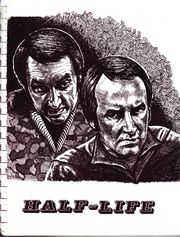 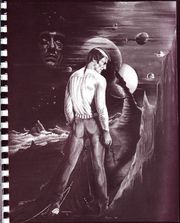 cover of issue #2, "The Log of the Hellhound" (book 4) by Suzan Lovett

Blake's Doubles 2 was published in 1989 and contains 119 pages of reduced print. It contains two Blakes 7 novellas back to back.

“The Log of the Hellhound, Book IV” by Katrina Larkin & Suzanne Tilley.

"The story of the Hellhound continues as Blake’s crew find an abandoned Raldeeni ship, contend with plagues and Federation attacks, and continue to confront ghosts from their pasts."

"Orac made a prediction shortly before the Altas attempted to reclaim the Liberator--and that prediction came true when the Liberator’s sister ship was destroyed. But Orac’s meddling went deeper than anyone ever guessed and the consequences are much more far-reaching."

Blakes Double's 3 –- Contains two Blakes 7 novellas back to back. Artwork by Adrian Morgan and Leah Rosenthal. 102 pages of reduced print. It was published in 1998. 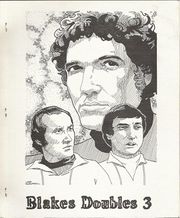 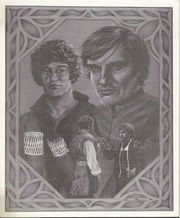 "Tarrant, Vila and Avon have learned to depend on each other, have begun to build a new life, although the scars of Gauda Prime still linger...but a chance meeting in an unexpected place could change their future forever...."

"A rebel group plans to “liberate” the bodies of Blake’s fallen Seven before Commissioner Sleer can put them on public display as an example of Federation justice...which proves fortuitous to the “bodies” who aren’t dead yet and are very grateful to be liberated!"

Thank you very much for Blake's Doubles - 3. It is delicious. "Metamorphosis" is polished and professional, with exceptional characterization. At last, the story I've been waiting for! Sheila tends to write Tarrant as pathetically and unrequitedly devoted to Avon. This is most definitely not a complaint. I see the Tarrant-Avon relationship in much the same light. (The boy has such a talent for martyrdom.) But it is satisfying to see Tarrant's loyalty finally appreciated and returned.

Gale's story is also great. There are some very humorous moments, such as Tarrant's embarrassment at having a pretty female doctor, and Vila's calculating the odds at only 5 to 2, since he had two guns. The alien computer is a promising new character. Is Gale planning a sequel? Hope so! I'd like to see Riker explored a bit. And Tia hasn't gotten Avon yet...

Leah's cover is totally awesome. Adrian's and Theresa's illos are stylish and unique. All in all, a beautiful, top shelf zine.[1]

Blake's Doubles 3 was confusing because the stories were so similar--not in plot, but in both being post-GPs with the focus being on Avon, Vila, and Tarrant. Discussing it with other fans was difficult because we never knew ifwe were talking about the same story from the first.[2]

Blakes Doubles 3 showed up! Two great stories and all those wonderful zine ads. I can't figure out which I like better but I think I'm leaning toward "Afterworld." The characters seem more fleshed out somehow, especially Yang. Even though he was only in it for a short bit, I really liked him. I hope that's not the end of that story (universe?). When I finished it, my mind said, "More!" Do they find the Mirish? Is the teleport working? Does the Blake-clone find Avon? Does Vila get the girl? (It seemed to be going that way.) And most important, do they rename the ship?!

"Metamorphosis" was Sheila's usual best. (How does she do it? I can't even write a coherent letter sometimes. But that's okay, I'm a reader, not a writer.) Her touch with the "give and take" dialogue was excellent. A little note of "We're not quite up to the way we were, but we're trying." Some really good character development, especially with Tarrant. It showed they've learned some lessons and profited by them.

One fault I find with these stories (and a lot ofothers) is the way Vila is ignored. Except for Last Stand he's woefully underplayed. He's constantly used for a catalyst, and then forgotten. Vila is hurt, so Tarrant and Avon come to an understanding. Vila talks to Blake, hey presto!, Blake and Avon are reconciled. But what about Vi/a? His fellow crew are not the only ones who take him for granted. [You might be happy to /mow, Mary, that Leah and I are RIGHT now working on a Last Stand story which will deal heavily with Vi/a's past and the further adventures of the rebellious Last Stand folks... Ed.]

Please keep writing, and please keep publishing. you do seem to attract the best.[3] 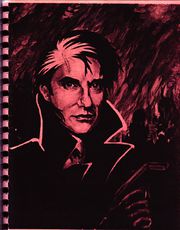 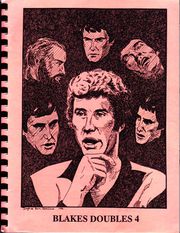 Blakes Double's 4 – Contains two Blakes 7 novellas back to back. 95 pages of reduced print. It was published in 1999.

“The Log of the Hellhound, Book VII” by Katrina Larkin & Suzanne Tilley.

It contains “Wonderland,” Rule Britannia,” Shadows More,” “The Wolfmasters of Hearne,” and “The Drowning Man.”

“The Dreamers” by Sheila Paulson. It is a sequel to “Game of Humanity” which originally appeared in the zine Probability Square.

I don't think that Sheila Paulson's "The Dreamers' is up to the standard of her earlier Game of Humanity.[4]