Olag Gan was a regular in Blake's 7 for for the first series and a half. He is one of Blake's first allies aboard the prison ship London, and is again one of the first to join him when Blake returns to collect allies on Cynus Alpha. He continues to largely support Blake throughout his time on the Liberator, only disagreeing on moral issues, most notably when Blake tries to ally with the Terra Nostra (a gang of drug lords) in the episode Shadow. Gan is one of Blake's party during the raid on Central Control (Pressure Point) - he gives his life so that the rest of the crew can escape, telling Blake to "Go! I'm not worth dying for!"

A large man with a limiter in his brain that prevents him from killing, Gan is typically described by cast members and writers alike as 'gentle giant'. In episode 10 of series 1, his limiter malfunctions causing Gan to turn violently on the rest of the crew, but this is a highly abnormal occurrence and once the limiter has been repaired Gan is once more depicted as genial and friendly. He was sentenced to Cynus Alpha for murdering the Federation trooper who killed his 'woman'. The Blake's 7 annual claims that Gan is from a planet called 'Zephron', rather than Earth, but there is no evidence for this, either way, in the show as aired and this fact is only occasionally used in fanfiction.

Gan's backstory is developed in more detail in the paracanonical audios by B7 Media, particularly 'When Vila Met Gan'.

Gan is one of the less popular characters in Blake's 7, though he tends not to elicit the strong dislike that characters like Blake and Tarrant have suffered from.

The fan Twisted Sister, known for being particularly pro Gan, wrote a number of Gan-centred fics, that often included metatextual commentary on his role in fandom.

"I thought you would be the best person to comfort Avon after his rape. You are certainly more gentle and nurturing than any of the others."

<In the middle of their wrestling match back in the original thread, Soolin and Tarrant paused briefly, looking insulted. >

"Besides, " the Writer continued, "You've been underused for so long, I thought you deserved some time with the most sought after character of the show."

Gan continued to look bewildered."You make him sound like a prize, not a man who has just been brutalized."

The Writer, dismissed that, "He gets abused on a fairly regular basis in fan fiction, especially in slash. In this particular story there were several people fighting for the chance to comfort him before I brought him here."

"If that what happens to you when you're a popular character, I don't think I've been missing much." Gan stood there with his arms firmly crossed.[1]

The fic continues down this path with Soolin kidnapping Gan once she sees how well he does with Avon, and then Gan having to comfort Tarrant who has lost out twice. 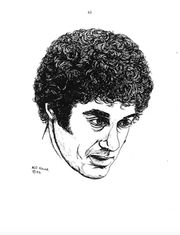 A rare Gan image, art by Mary Bloemker, published in B7 Complex
Gan also features in a variety of gen fics, occasionally as the lead. These fics are often likely to deal with his backstory. Some fics show Gan dying in Pressure Point and returning in some fashion, good or bad, however he rarely shows up in Post Gauda Prime fics (one major exception is Jabberwocky). He is rarely featured in fanart (perhaps never featured in shippy fanart?) or fanvids.

Modern Livejournal and Tumblr based fandom seems also to be generally pro-Gan.

Gan for me is the best example of what Blake was fighting. He was a man who had suffered terrible injustice and brutality at the hands of the Federation. Even though he'd lost his wife and ability to defend himself, Gan never gave in to hatred and revenge and maintained his dignity, compassion and morality. He is usually the first to give someone the benefit of the doubt, which is nicely refreshing from the suspicious and cynical natures of Jenna, Vila and Avon. (Grade Four Ignorant, 2014)[2]

Apparently kids who watch B7 often identify most strongly with Gan. Maybe Gan had a child-like innocence which was natural, unlike Vila's "innocence" which seemed to be an act so that the bad guys never saw him as the main threat. Or, kids are attracted by a father figure (big and strong and gentle). Although I like Vila, he always feels a bit 'artificial' to me.

Watch 06.Seek-Locate-Destroy: my, everyone has a good time ordering Gan about in this ep. Take a look at the scene where they're actually stealing the gizmo. Gan, take the prisoners out. Gan, set the mines. No, Gan, on the other side of room! Gan, come here. Gan, guard the door. Gan, come back here. Gan, rip the gizmo out.

And he does it all with perfect good humor. Very nice guy, our Gan.[3]

Olag Gan wasn’t a very interesting character in the series itself, but he had SO MUCH potential to grow into one. He wasn’t dumb, he knew exactly what he was capable of, which is why he chose Blake over the people at Cygnus Alpha. He knew that he wasn’t good on his own anymore, because of the limiter. He lost everything dear to him, and honestly thought that Blake’s rebellion was a chance for a better world (if he didn’t believe it at the beginning, he started believing it in the end). The story of “When Vila Met Gan” gave new life to the character which I wish that the writers could’ve seen back in the 1970’s, because I honestly believe that Gan could’ve been great. It’s never revealed why Lola gets killed, or why Epi’s were outlawed. Did his foster parents know he was an Epi, and if so, did they love him for it, or only raise him out of obligation? When did he find out he was an Epi, and thus “not really human”? What kind of a man was he before the limiter, and what kind of a man would he have become if they had let him live to see the end of the series? He had such an interesting premise they could have built on, if they had only realized in time.

OLAG GAN IS SO UNDERRATED AND, AND HAS BEEN UNDERRATED SINCE HIS CREATION, AND IT MAKES ME ANGRY. And I’m angry for all the “could’ve”s and “would’ve”s. I’m angry for what -might- have been.

He did have a lot of potential, and at least Chris Boucher seemed to realise it in ‘Shadow’, where he stands up to Blake (and holds the moral high ground). It would have been VERY interesting to see that particular conflict developed more as Blake becomes increasingly obsessed during the course of S2. (though some would probably say that it’s partly because of Gan’s death so… *shrug*) I find it interesting that in fandom Gan often gets reduced to “the kind but stupid one” when in fact I think the group dynamic suggests that he is at least above Vila in the pecking order, and generally considered smarter (even by himself, given by how often he gets to reprimand Vila, and Vila seem to defer to him.) (comarum, 2015)[5]

i like him because he’s not as crazy as everyone else, basically. because he is the honest man that avon’s never met - he’s the kind of guy who will say ‘yes’ and mean it when asked ‘You would give the instruction for your own death?’ (in order to save the lives of some people you’ve never met.’ blake does believe in that sort of stuff, obviously, but sometimes he can bend his morals for the bigger picture. gan cares about people and about doing the right thing (i agree with comoran that his best moment is in ‘shadow’ where he tells blake off, even though he can’t quite see it through because blake gets distracted by avon - i like that he’s not just a pushover) though i also like that he genuinely seems to believe in blake’s ideals as well - avon asks him whether gan would go with blake to central control, and gan says he would, no questions (at that stage). just one example - ultimately he trusts blake and blake’s cause; and i think his protestataions in ‘shadow’ are in part the protests of betrayal.

he’s a wonderful foil to a ship full of unhinged and largely immoral geniuses (cally has a similar narrative function to gan, but doesn’t work quite as well because she’s a weird alien).

i love that his final line is ‘i’m not worth dying for’ - i think that’s a fantastic representation of the character - who is so selfless, and who has supported blake all along, though not blindly. and the really tragic part about his death, of course, is that (the way i see it) gan’s death is ALL about blake. (Aralias, 2015)[6]

While most fans take Gan at face-value, there is a relatively well-known theory that the limiter has altered his personality from that of a sex maniac into the 'gentle giant' we see in the show. This theory was probably developed and was certainly popularised by Alan Stevens and Fiona Moore, the authors of Liberation: the Unofficial and Unauthorised Guide to Blake's 7. There is evidence that this fan theory has been wrongly interpreted as canonical by some more casual viewers.[7].

As well as featuring heavily in this book, the theory is also expounded on in an online article called Olag Gan: Gentle Giant or Sex Killer?, which was to be published in the fanzine Scorpio Attack!. It is also referred to in the paracanonical audio drama 'The Mark of Kane' (1996) (written by Alan Stevens with David Tulley, starring Gareth Thomas and Brian Croucher).

KANE: What? The guy who killed all those women? Oh, yeah, of course, Olag and Tando used to go around together didn't they? Before Olag got himself arrested, that is.

TANDO: Olag was me friend.

KANE: What did they used to call him now?

BLAKE: I only got to know Olag after the limiter had been fitted.

KANE: Bet he was like a kitten wasn't he? But you must have been a bit suspicious, surely? They only fit the worst with limiters. [8]

Aside from 'Mark of Kane' itself, very little other fanfiction makes use of this idea. One example that does is Judith Proctor's A Scale of Violence.

Many fans seem to find this theory unlikely or distasteful.

I don't have to mention Occam's Razor, surely?

Really, the idea of Gan's dark and violent past, chock full of broken bones, rapings, pillagings and felinicide is something that I actually find just as equally dreary as repellant, the end result of sci-fi fans who have become so fixated on the ridiculous assumption that grit equals quality.[9]

And as a theory, it's complete nonsense refuted by numerous episodes, as the vast majority of time Gan's limiter is inactive and he doesn't seem much of a mass murderer to me. The same theory from the same writing team appears in "The Mark Of Kane". As much as I like "Mark Of Kane", I simply ignore about the bit about Gan, because it's nonsense.[10] 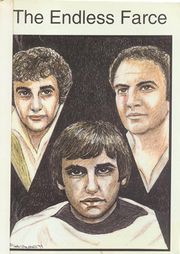 Cover of The Endless Farce, art by Whitby27