Cally is a Blake's 7 character.

Cally is an alien from the planet Auron and has telepathic powers. She is the only alien in the crew, the only one who is not a convicted criminal and the only revolutionary besides Blake. There are a lot of confusions and contradictions about her background, her origins and the degree of her alienness in the show.

But if anyone suffered at the hands of the writers it was Cally. Some characters (like Soolin, or Gan) could be given a few token lines that just about anyone could have said, but writers seemed to feel an obligation to make something out of Cally. Her debut was promising, clattering down the cliff like that, pointing her rifle at people and making quite clear she knew how to use it. (And before anyone pipes up, yes, I do know the good-looking woman with a gun and a heart of gold is another stock male fantasy. But it's a good deal healthier than the simpering subservient nymphette or the cold psychobitch, and at least it offers something as a positive role-model. And I happen to like it, so there!)

But from there on, it was pretty much downhill. Cally the combat wise guerrilla turned into Cally the bleeding heart mystic, Cally the soothing nurse, Cally the cosmic hippy, or as often as not just Cally the teleport operator. From the second season on I remember her mainly as looking harassed and drawn, rather pitiful even. In many ways she became increasingly cast in the role of Victim. I'm not sure, but I think she got captured and tortured more than any of the others. And of course, there's the mindjacks, starting with The Web and culminating with two in a row at the end of the third season (Sarcophagus and Ultraworld), with Shadow and Pawn of the Gods in between. Quite why being a telepath makes you more vulnerable to this sort of thing I can't imagine. I' m more inclined to think you'd be better equipped to resist it. Lois Pierce suggests that writers didn't know what to do with Cally. I disagree. They just showed a lack of imagination regarding what to do to her. I'm not sure it's going too far to suggest that some of those alien takeovers were little more than a euphemism for rape (especially DotG, by far the most pointless example). Why I'm not sure, but I suspect her aura of sexual innocence had a lot to do with it. Cally somehow seemed to be chaste, pure, inviolate. She never had to suffer the plunging necklines and bending low over consoles inflicted on Jenna, Dayna, Servalan and Soolin.

Cally's character did undergo change during the three season she was on, from the warrior of "Time Squad" to the kind of moral conscience of the group in some of the third season episodes. It's always nice to see some character development (episodic television is an ideal place to for it, but rarely manages to do it convincingly), even if it doesn't necessarily go the way you want it to go, and I think Cally's change is justifiable.

At the beginning of season two, Cally is still very much attached to Blake's freedom-or-bust ideology, as it's with Cally that Blake discusses his strategies and gets most support from ("Weapon"; "Pressure Point"), as opposed to Jenna whose dedication is primarily to Blake himself and not the dream he's fighting for (which is why he discusses more personal things with Jenna). Though she still believes in Blake in "Trial", some doubts have begin to emerge. In "Star One", the epic culmination of the "Blake-era", she is the only one to point out the moral dilemma of risking what could be labelled as genocide by destroying Star One (with a sudden simultaneous breakdown of just about every larger computerised function in over 200 worlds, many which are probably completely dependant of them, could well mean a death toll of millions, with entire civilisations wiped out by flooding, famine, loss of life support etc.). I think this scene nicely represents how not only she, but how the whole series has evolved from the rather simplified beginning. After all, Blake himself has changed from his more idealistic, "power back with the honest man" roots to someone seemingly driven by the raw need to just get the enemy slain, to prove that it was the whole world that had it wrong, not him.

The third season Cally has gone through the Intergalactic War, and seen the fight for freedom fail despite all the effort and sacrifices. I think being hot on revenge and other violent action has understandably lost its taste for her. With Avon now in command of the Liberator and not interested in risking his neck to smite any tyrants, there is no room for much rebel rousing, anyway. Stuck on the Liberator with no cause, no home to go back to and probably no other safe place in the galaxy, surrounded by people she might not relate to all that well (excepting possible attraction to Avon), her feelings must be accurately described by her comment in "Sarcophagus" : "Why not? It's something else to chase" (a sentiment that seems to describe the whole confusion of the third season). Having her shout down the Vila, Tarrant and Dayna when they are orbiting Shrinker like buzzards is one of my favourite moments in "Rumours of Death". Again, if you want to enjoy being immoral, someone has to first point out that you are so. Cally handles this task well. [1]

The way Jenna is abused in "Checkers" set me thinking about the apparent preference (at least in the stories I've read) for Cally over Jenna. The obvious reason is that the series gives some clues that she and Avon might be lovers -- enough that the idea is very popular with fans. Cally, although a warrior, is also a more traditionally feminine character in some ways than Jenna -- Cally takes over the nurturing role of ship physician, she is more sympathetic to people in general and Avon in particular, she is not as outspoken in her opposition to either Avon or Blake when she does disagree, she is generally more vulnerable, and less threatening. She is not a wimp (my favorite Cally moments are when she fights Blake, threatens Space City, challenges Avon's revenge, and so on), but she has more soft edges than Jenna, Soolin, and Dayna. I think her telepathic abilities and status as an outsider also make her a more appealing character to identify with. The fact that her beauty is not repeatedly referred to, as it is with the others, probably also helps make her more comfortable.

[snipped] Hmmm...I guess all of these other things contribute to making Cally an easier character to relate to...but I really think the reason she is more popular, at least in fan fiction, is her connection to Avon. [2] 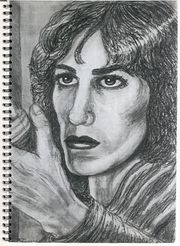 Cally is probably the most featured female character in Blake's 7 fanfiction. The inconsistencies in her background and perceived changes in her canon characterization has been cited as the source of both frustration and inspiration for fan writers. The essay Recurring Themes in Blake's 7 Fan Fiction lists some tropes related to her portrayal in fanfiction that were popular at least at the time the essay was written:

Cally is often the mystical, wise, serene alien: She isn't taken over nearly as often in fan fiction as in the series, nor is she the warrior who wants companions for her death. Usually, she is just too good to be true. In slash stories she is often approached for advice by one of the men and offers sage advice on human sexuality. [3]

Nevertheless, the stories that focus on Cally are more likely to emphasize her "tougher" side and are often described as more in line with her portrayal in her introductory episode Time Squad, while in the stories where she is a secondary character she is generally closer to the aforementioned "mystical and serene" persona and often takes the role of the ship medic. Cally's telepathy and her alienness are brought up in fics more often than in the show and sometimes play an important role in the story; however, fics that center on them are rare. Some other themes that are explored in Cally fics are: her revolutionary convictions, moral questions in general (many fans perceive her as the most moral person in the crew), dealing with trauma (usually from her exile from Auron, deaths of her comrades in Saurian Major or the genocide of Auron people in the season three), difficulties of being the only telepath and alien among non-telepathic humans. Her sister Zelda and her pet Moon Disc are often mentioned even in fics where she is not the main character.

Cally has the reputation of the character who often gets possessed by various telepathic entities in the series. This plot device has become the subject of many jokes and criticisms in the fandom.

Despite being supposedly dead by the end of the series, Cally sometimes shows up in post-Gauda Prime fics; a popular plot device used for this was discussed in Recurring Themes in Blake's 7 Fan Fiction:

Auron death trance: Cally wasn't dead when Avon went back for her on Terminal. No, she was in a deathlike trance Aurons can will themselves into. The ability to do this is not mentioned in the series. A possible source for the idea, however, is Cally's reaction to the various alien possessions she endured--in "Shadow," "Dawn of the Gods," and "Sarco- phagus," Cally was unconscious but alive. Although the trances seem to be caused by the invading aliens rather than being self-induced, it is possible to think that Cally withdrew into herself as self-protection. The other source for the idea is perhaps Star Trek and the Vulcan ability to lower vital signs to give the appearance of death. (SC) It could also be a cross-over from Dr. Who: I think a fair number of Doctor Who fans migrated to Blake's 7 when it debuted on the American scene, so some of the Doctor Who fanfic ideas may have migrated with us. (LB) [4]

Cally is the most popular female character in shippy fics and a part of the most popular het (Avon/Cally) and femslash (Cally/Jenna) pairings. Virgin Cally or Cally that had no experience of sex with humans used to be a very popular trope - and very old one, appearing as early as in 1978 in "The Initiation" by Anne Lewis from Alternative Seven #1. Usually such fics suggest that the use of cloning on her planet made the need for sex obsolete, but also sometimes this trope is explained by physical or telepathic incompatibility with humans. Alien Kink is rarely explored in fics with Cally and so are some telepathy-related tropes like telepathic bonds.

The authors that were fans of Cally include Lillian Shepherd, Neil Faulkner, Red Star Robot and Lyssie. 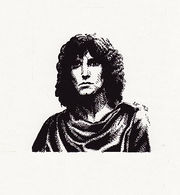 Inside art from Avon's 8 by Evelyn Turner