From Fanlore
< Avon
Jump to navigation Jump to search

Avon/Cally is the most popular het pairing in Blake's 7. Although looking at fic-numbers on places such as Hermit's pairing guide[1] and Archive of our own[2] would suggest this ship was written significantly less than slash ships, such as Blake/Avon and Avon/Vila, the pairing frequently appears in what were then labelled and categorised as gen fanzines. For example, the Avon/Cally romantic relationship is important in Sheila Paulson's Jabberwocky series, and is mentioned in as a definite possibility in Lillian Sheperd's The Machiavelli Factor, neither of which are listed as A/C on Hermit because they do not involve the relationship being explicitly consummated within the fic. It therefore has a bigger presence as the main pairing in a fic than can be easily categorised.

Many fans writing about Blake's 7 seem to treat this ship as essentially canon[3] (in the same way that they treat Blake/Jenna as essentially canon). Avon/Cally is therefore relatively likely to be included as an off-screen pairing or background pairing in other fics (for example, as well as its two actual A/C fics, Forbidden Star 2 has two fics that treat Avon’s relationship with Cally as important history: Neil Faulkner’s "Things that Never Get Said" and Loulou Harris’s "Cold Revolution”. Avon even has a previous relationship with Cally in slash-fic The Long Way Back!) 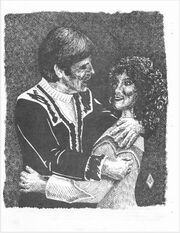 Cally and Avon, from Blakes Doubles #3 (1989), artist is Adrian Morgan

]]Given Avon's status as fandom's darling, it is at least possible that Avon/Cally is derives much of its popularity from being a heterosexual ship that involves Avon and doesn't involve a villain. It is also possible that many writers see Cally as an identification figure. The question of whether the actors or writers of the show supported the Avon/Cally relationship is important to many fans of the pairing. Some fans point to writer Tanith Lee's episode Sarcophagus where Avon kissed Cally to release her from from a spell as evidence of support. Because het ships have historically been more socially acceptable than slash ships, others believe that the actors involved have been asked whether or not they see the pairing as canon, which they have denied. In contrast, pro-support fans argue that Paul Darrow made several statements regarding the Avon/Cally romantic relationship. In 2011 a fan reports that she remembered Paul Darrow answering a fan question about whether there was a relationship between Avon & Soolin:

I asked Paul if he felt there should have been a relationship between Soolin and Avon he said "oh no no Avon and Cally" So he obviously considered that option for B7 but Jan went back to the stage so we can only wonder what might have been had Jan stayed on B7 another season.[4]

Hi. Sorry to bring up a post that happened two years ago, but on the Horizon site, it has been hotly debated whether there was something going on between Avon and Cally. I always thought there was an attraction, but I don't think it spilt over to the physical, but your post kind of confirms that? Interesting that Paul acknowledged what we all knew, ie the unresolved attraction between them. Kind of anyway. :)[5]

Other supportive examples include the 'Paul Darrow Writes', a regular column in the Blake's 7 magazine Blake's 7: A Marvel Monthly (Sept 1981) where the actor said: "One other thing. Cally was no longer with us. If you have watched the series, you will know what that meant to Avon. Jan Chappell’s departure from the programme left a gap that was never filled. She had her own good reason for leaving. I, for one, wish she hadn’t."

Perhaps for the reasons mentioned above, Avon/Cally seems to be perennially popular with non-transformative fandom, where other ships are not. There has been relatively little A/C fic written in the internet age, although some has been posted to Fanfiction.Net and Archive of our Own.

A popularity of this pairing in songvids was noted in the 1993 essay Pairings in B7 songvids:

Lots of C/A vids out there, Lots! But everyone must think Aurons are almost monogamous...she hardly ever gets another date--there must be 20 C/A's for every one C/T, and she never gets any body else.

There is relatively little fanart.

During the show, a romantic attraction was often teased between Avon and Cally. The first indication of this was during the episode "The Web," when Cally tells Avon, "I'm interested in your work," and the two share a long, lingering glance (that also has the humorous side effect of making the normally unflappable Avon somewhat speechless). However, an actual romantic relationship between the two was never explicitly shown during the series. The closest they came to a romantic interaction was during the episode "Sarcophagus" when Cally's body was taken over by an alien lifeform seeking a host through which to live again. The alien tried to win Avon over (the only crew member not intimidated by it) by telling him, "Cally liked you," and that he could be at her side. Avon went so far as to kiss the alien (again, who was using Cally's body) in a ruse to gain its confidence and defeat it, freeing Cally in the process.

Similar references were made throughout the series; in the episode "Voice From the Past," Blake (under Federation mind control) fools Vila by telling him Cally and Avon have "paired up," which Vila quite readily believes. A slightly more bitter note is shown in the episode "Children of Auron"; when Cally reveals why she has never returned to her homeworld, she quite pointedly snaps, "Why do you imagine I've never gone back...affection for him?" at which point she storms off (and the other characters look towards Avon).

Cally and Avon quite often went on missions together and shared a knack for delivering quick-witted replies to the other's statements, which would somewhat indicate a growing affection for each other. However, Avon quite openly disdained her compassionate nature and her idealism, which he found to be only somewhat more tolerable than Blake's. Similarly, Cally at times openly mocked Avon's "cold" nature and often clashed with his more self-serving instincts. At one point during the episode "Horizon," Cally and Avon are the only two humans left on board the Liberator, and Cally pointedly rejects Avon's idea of leaving together (and the others to their fate). During the episode "The Keeper," Avon takes the ship out of orbit (and teleport range, leaving Blake, Jenna and Vila stranded in a moment of trouble) to blast Travis' ship, thinking Travis is on board. When Avon later attempts to do the same to what he believes is Servalan's ship, Cally flatly refuses, reminding Avon of what happened last time.[6]

Big Finish have provided some additional evidence for this ship in their paraconical audio plays and books, particularly in those works written by women (many of whom were previously in fandom). These include Jac Rayner’s ‘Mindset’, Una McCormack's Ministry of Peace, and MG Harris’s Cold Revolution (a complete re-write of her Forbidden Star 2 story of the same name).

The oldest Avon/Cally fic is likely to be Anne Lewis’s ‘The Initiation’ in Alternative Seven 1 (1978). This early fanzine also published A/C fic in its later issues, for example Miss Terious’s ‘Empathy’ and Carole Fairman’s jokey ‘What a Way to Go’ in issue 2, and Kathleen Glancy’s ‘The Reason Why’ in issue 3 (all c1978). Although A/C was later going to dominate het shipping, the spread of ships is relatively even (for example, the first issue continues one of each of the following: B/C, A/Meegat, V/OC, A/C, B/J, V/C, J/Tr, A/J, G/J, C/G; the second zine contains two A/Cs, and one each of various other ships, many of which feature an OC, etc).[7] The other major B7 het zine, Straight Blake's, is similarly varied. Avon/Cally dominated overall by appearing mostly in mixed zines alongside various slash pairings (presumably quite irritating for some het shippers), as well as in “gen” (as mentioned in the introduction).

The Blake/Avon/Cally novella Mindfire (1979) was also published before the series finished airing. Interestingly this story, though not publicly available for many years, includes many of the tropes that characterise later Avon/Cally fic - most notably that Avon has some sort of latent telepathic powers.

In other fics Cally’s telepathy is used for other plot devices, for example in Madelyn Darring’s "Everybody Wants You Now" Avon broke up with Cally because he could see their sex was telepathically affecting the rest of the crew, but her sexual frustration then reflected onto the rest of the crew who then spent the rest of the fic trying to get him into bed.

Although Mindfire’s choice to bring Blake sexually into the central relationship is unusual (a few later fics do include a threesome, but this is relatively rare), many A/C fics do include a strong friendship between Blake and Avon which may drive the narrative more than Avon’s romance with Cally (see, Jabberwocky, The Machiavelli Factor, Renaissance, The Mind of a Man is a Double-Edged Sword etc). Others are more likely to see Blake as the force that keeps Avon and Cally apart. A/C fics are also likely to deal with the near-bodyswap experience of series 3 episode ’Ultraworld’ (one fan comments in a review of Don't Send Me Back by Fran Ward: "the-tubes-got-switched-at-ultraworld', and I, who will willingly read almost any tripe, just cannot bring myself to read this plot. Once was enough"[8]) Cally is often sexually inexperienced with human men.

A fan asked to provide some good links in 2016 wrote:

Are you okay with smut or just a slight romance. (because I have to tell you, the authors I’ve found usually go big or not at all) Kalinda, I feel, is the current queen of the Avon/Cally. She had a couple of good ficlets that are tame but her baby is her world building games of thrones-esque still WIP ( I think) PGP novel that I still haven’t finished because, honestly, nobody can take that much Avon-torture in straight reading. (I’m not sure how she wrote it.) When she reaches that point though, the Avon/Cally is heartbreakingly sweet (not in the beginning) and honestly, you’re rooting by midpoint to wrap Avon in a blanket, give him tea, give Cally an automatic weapon and let her go after everyone.[9]

Other example Avon/Cally works include:

As stated above, there is relatively little A/C fanart, perhaps because although a popular ship it never dominated any zines. The collection of fanart below encompasses all the definitely A/C images currently uploaded to Fanlore, as well as some that just feature the two of them together. Some later fans also created A/C manips.