A Companion for My Death

A Companion for My Death is a het Avon/Cally Blake's 7 post-Gauda Prime 168-page novel by Tashery Shannon. It required an age statement to purchase.

Around 1996, this zine was "newly reformatted to double-column" by Bill Hupe, and this edition contains 120 pages. 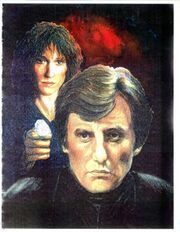 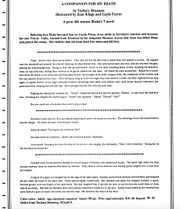 flyer printed in Fire and Ice #1

From Media Monitor: "This post-Gauda Prime novel finds Avon under Sevalan's control with ORAC. Cally is also a primary character."

From the zine: "A Companion for My Death is intended as a complete story. While a sequel is not absolutely impossible, the end of this zine is the end of the present story."

Well, I've raved about this before, so I won't repeat myself, except to say it's fantastic. In too much fanfic, Avon tends to lose his edge and there's no doubt in hell that he retains it here.[1]

B7 was a show populated with characters just begging to have their layers peeled back for the exploration of fans. This is a story that does just that, at the skillful hands of Ms. Shannon, with the characters of Cally and Avon.[2]

Seems only Blake and Tarrant died at Gauda Prime this time! Avon is being forced to work for Servalan (and, um, “entertain” her at night) with Vila, Dayna, and Soolin as hostages. Meanwhile, Cally was rescued from Terminal by a race of secretive telepaths, and now that she’s healed, wants to know just what the hell happened.

This one is definitely “adult”, featuring quite a few graphic sex scenes. Not to mention much rawer language than average for B7 fanfic. Storywise, it’s an interesting look at Avon and Cally’s motivations and relationship. If I have a complaint, it’s that it leaves the action hanging a bit. I can’t help but feel that a sequel was needed, if only to get the rest of the crew rescued.[3]

[response to the previous comment above, posted by the author here on Fanlore]: Aww...Brunhilda, you've reminded me. I'd completely forgotten that I did intend a sequel. I'm even remembering a few bits I'd planned, wow! But not how the plot went. Avon and Cally did rescue Soolin, Dayna and Vila. To overthrow Servalan they hid out in an obscure desert place on earth - ha, now I remember, it was in the rock tombs at Amarna in Egypt...silly idea. Dayna finally got to kill Servalan...I wish I could remember more. - Tashery [4]