Jenna Stannis is a character on Blake's 7. 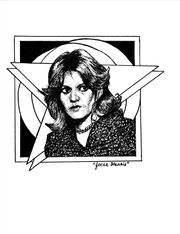 from B7 Complex #2, artists is Mary D. Bloemker. A quote by Roj Blake in the episode "Blake: "... when she went, she took half a fleet of gunships with her..."

A Quick Guide to Blakes 7 describes Jenna in the following way:

A member of the privileged alpha grades on Earth, Jenna Stanis turned to crime at an early age and became one of the best space pilots in the smuggler fleets. She is an invaluable member of Blake’s crew but hers is a personal loyalty to the man who rescued her - she has a debt to pay. She does not believe that Blake can defeat the federation but she will continue to help him. She cares about people, not ideas like justice or freedom. She believes that life is too short to worry about the evils of the Federation.[1]

Jenna's portrayal follows the common pattern for the main female characters in Blake's 7: strong introduction but diminishing role as the series progressed. Sally Knyvette initially had high hopes for the role but was dissapointed with the failure to fully realize the potential of her character and with the developments that she regarded as growing sexualization and gender stereotyping of Jenna, which she cites as one of the reasons why she eventually decided to leave the show.[2]

Jenna is actually the reason I hung around for the first few episodes my first time through the series. She came onto Blake, took that slap from Raiker with aplomb, mouthed off to Avon, and beat the hell out of those frozen aliens. I really hated what happened to her character in the 2nd season (although it's my favorite season for so many other reasons). It's like they forgot that she's the only one with any real space experience. *sigh* [3]

Jenna is the link between the beautiful, but largely one dimensional 'Bridge Bunnies' of early sci fi, and the capable, self sufficient female characters of modern sci fi. She is part Dale Arden, part Cassiopeia, part Yeoman Rand, but she is also part Aeryn Sun, part Susan Ivanova, part Zoe Washburne, and these latter characters owe her a debt. Jenna was not only one of the first female pilots in television sci fi, but the pilot of one of the most powerful and iconic vessels in sci fi history, the Liberator.

Even Servalan, her arch enemy, describes Jenna as “a superior grade citizen,” with a “very high IQ.” To this end, Jenna is a capable pilot, smart and street-wise, but she is also the Resistance Fashion Model, or in the words of actress Sally Knyvette, the Liberator Clothes Horse. It seems a contradiction that is hard to reconcile, unless you remember the times from which it sprang. [4]

Jenna, on the other hand, is sharp -- especially to Avon early on (the very reason I prefer her), very social (she knows everybody, Tarvin, Largo, Avalon...), closely linked to Blake rather than Avon, pilots the ship and had an independent life before the series (her connections to other people are to individuals and seem to be business; Cally is part of a group of fighters and also from a closely-knit community), and is not terribly concerned with the fate of people other than her shipmates. [5]

Jenna has always been my favorite character. Independent and able to look after herself, though not quite the tough cookie she would like to appear; pragmatic, yet wanting to believe. As Peladon said, what's not to like. And I do envy her cool under fire; like Vila, I tend to fuss when I get stressed.

I think The Liberator represented freedom for her (in a ship like this we could go anywhere). It seemed wrong that when Blake and Avon discussed who would get the ship, they never seemed to consider Jenna. [6]

According to the 1993 essay Pairings in B7 songvids, she rarely featured in songvids of that period, as a main character or a part of a pairing:

Jenna-what can I say, the Rodney Dangerfield of B7: she gets no respect (or screen time). Often a bit player in other people's vids, or in general ones like "Girls just watch to have fun," she only has a couple of her own, and very few pairings. The Jenna/Avon was one verse out of a 4 verse song, where next he was with Pella, then Servalan and finally Soolin (how fickle!) 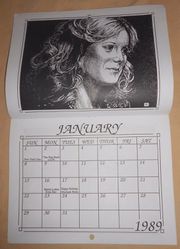 Jenna on a fan-made calendar, art by Karen River

Jenna is generally characterized in fics as tough and competent, thought details may vary. Some stories portray her as very cool-headed and detauched, others interpret her as more harsh and aggressive, but most characterizations of Jenna fall between those extremes. While she usually is a secondary character in fanfiction, some authors intentionally try to compensate for her perceived character decay during the series by having her participate more actively in missions and generally giving her more opportunities to be badass, even when she's not a main character. Sometimes such fics also feature Cally and Jenna & Cally (or Jenna/Cally) relationship more prominently than the series did.

Jenna's smuggler background is brought up in fanfiction quite often, but fics that focus on it are rare and often feature some canonical characters (Tarvin, Largo, Avalon.) Though the series imply that she was quite famous (at least in the criminal world) even before joining the crew of Liberator, it's rarely explored in depth in fics.

Other stories emphasize Jenna the pilot and her love of flying; some of them explore what she may think about piloting such an unusual and technologically advanced ship as Liberator and what her bond with Zen may be like (sometimes they even feature Jenna/Zen as a pairing).

Fics about Jenna's past often show why and how she became smuggler or pilot.

There are several popular fanons of what Jenna's family could be like:

Some fanfics tell the story of Jenna's mother, the vision of whom was shown in the episode Space Fall.

Jenna also sometimes is portrayed as close to her father (for example, "I Was So Young..." by Katrina Snyder & Susanne McGhin, Big Finish audios), though canon says nothing about him or their relationship. 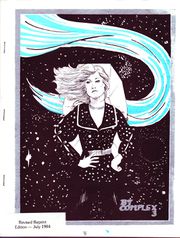 Front cover of B7 Complex #3, silkscreened, by Deborah Walsh. The artist comments on this one "The theme of the silk-screened art in the zine was the four elements. Jenna was wind, Cally was fire, Dayna was water, and Soolin was earth (and the back cover).[7]

Stories that give Jenna a big role often are set post-Star One. They usually also feature Blake, but some show Jenna on her own.

Jenna rarely shows up in PGP fics, even though her death is the easiest one to explain away. However, some fans have headcanons where she is alive after the end of the series, either because Blake's story about her death is a lie or because she faked her death. [8]

Relationships with Other Characters and Shipping

Inside art from Avon's 8 by Evelyn Turner

The relationship with Blake is the most developed one among Jenna's relationships with the characters in the show. Blake/Jenna is also the most popular pairing involving Jenna, though often portrayed as one-sided or background. Some fans see Jenna's interest in Blake as her defining characteristic, and in some extreme cases as her only personality trait.

Well... they were two strong, bright people with different values. There was also a little bit of sparring, but it could have been taken much further. I mean, Avon and Jenna really didn't like each other much most of the time, so you could have a really good set-to and a break-up of some sort. I would love to do that. Avon is out for himself, while Jenna is much more of Blake's persuasion. She is out to help people, but she's got a tough, ruthless side, as we've discovered. She would always look after herself, when push came to shove.[9]

Some fans interpret their relationship as very hostile, while others portray them as more nuanced. There is also a relatively widespread opinion that those two characters have a lot in common; comparisons with Avon and analysis of their similarities and differences often crop up in fannish discussions about Jenna.

Avon/Jenna is probably the second most popular Jenna pairing, though it reportedly used to be more popular in the early fandom. Avon/Jenna and Avon & Jenna fics often also explore their relationship with Blake (romantic or platonic).

Jenna and Cally are often portrayed in fanfiction as good friends, though some fans tend to base their impressions on their initial tense relationship and assume that they dislike each other. Several Jenna & Cally fics are about Jenna overcoming her initial suspicions about Cally and becoming friends with her:

According to Nova's essay (Re)Making Space for Women, Jenna/Cally was the most popular pairing in Blake's 7 femslash (at least in the time when the essay was written) and Jenna was the most femslashed character:

A certain amount of fanon has also developed – a more hardbitten and piratical Jenna than the series allowed; an assumption that Cally's telepathy helps to overcome Jenna's resistance; a lot of drinking and the ongoing parallels between A/B and f/f. ...[10]

Jenna/Cally sometimes appears as a background pairing in Blake/Avon fics or has Blake/Avon as a background pairing, though stories that focus exclusively on Jenna/Cally also exist. Other f/f pairings with Jenna involve her with Servalan or OFCs. Changing by Jane Carnall, Jenna/OFC fic from "touched" #4, is credited by Nova as the first femslash fic in Blake's 7 fandom. [10]

Jenna's relationships with other characters are rarely the focus of a story, though there are some exceptions (for example, Jenna/Travis series by Alice C. Aldridge).