The Uses of Adversity 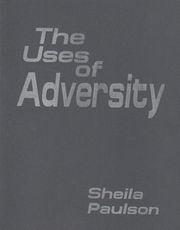 The Uses of Adversity is a gen Blake's 7 99-page novel written by Sheila Paulson and edited by Janet L. Walker.

Alternate universe story that breaks off after Death-watch. When Tarrant is evidently killed on a planet, and almost immediately afterward that leads the Liberator to Terminal, things happen just a bit differently. Who are the mysterious couple who rescue Tarrant? What happened on the prison planet Reyallen? Can the members of the crew ever reunite?

A novel-length AU that spins off just after 'Deathwatch', when Tarrant and Vila go off-ship and Vila sees Tarrant killed - or so he thinks. Sheila then uses the basic ideas from 'Terminal' and 'Rescue' to weave a plot that brings both Blake and Jenna back and, for good measure, saves Cally and the Liberator. However, Blake's been through utter hell since the Andromedan War and it's left deep physical and mental scars. There are lots of good things here - an intelligent adaptation of canon; upbeat but solid characterisation, including some especially appealing interaction between Blake and Tarrant and, at the centre, the relationship between Our Heroes, changed by time and pain but still the cornerstone of their lives (And Sally always enjoys watching Avon's reaction to Blake having been hurt - it does such fascinatingly messy things to his barriers). [1]

A single long story postulating that Tarrant becomes separated from the rest of the Liberator crew sometime between "Death-Watch" and "Terminal." Left for dead on an isolated planet, he is rescued by Blake and Jenna and joins them in their attempt to reunite with their lost crewmates.

The story is thoroughly engaging, with a satisfying blend of action and angst. Intense desire to see the crew reunited and healed pulled me through the zine at breakneck speed. The dialogue is a delight. My favorite line comes when Blake refers to Tarrant and Jenna as "my two pilots." Avon replies, "I rather thought one of them was mine." Very authentic, and it says so much about Avon, Blake, and Tarrant!

My favorite part of the story is probably the opening scene, where Tarrant and Vila are relaxing on an unspoiled planet. Vila's hesitant attempts to help Tarrant deal with Deeta's death are touching and perfectly in character.

Sheila Paulson is truly a fan writer's fan writer. Her style and talents are uniquely suited for fanfic. Writing for fanzines is completely different from writing original fiction, and, some say, far more difficult. You have to be inventive while not straying too far from the established "canon." Sheila's adept at walking that fine line between "cliche" and "too weird to be B7." [2]

Uses of Adversity is the only other zine of the ones I've gone through that definitely won't be sold off. It was better the second time through, I think. I was prepared for the Avon bias and forgave it because all of the characters are treated reasonably well and it's one of the few zines I've read where Blake suffers really well. There are a few too many "eewwww" moments where it gets downright sappy but I like it well enough that they don't matter. [3]

"Uses of Adversity" fell down for me because I couldn't really see Blake not getting himself out of trouble, and I really couldn't see him submitting to anyone as he supposedly did to the other prisoners. The story also annoyed me because the author wouldn't let the reader sympathize with Blake without prodding them to feel Avon had suffered more in his own way. God forbid any of the other characters should be allowed to suffer as much as Poor Diddums. And I liked the zine. [4]