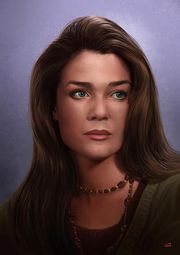 Susan Ivanova is a main character in the science fiction television series Babylon 5.

Fan Discussion Regarding Her Canon Sexuality

Many fans read Ivanova as lesbian and/or bisexual, something that sparked much discussion.

"Ice" by Katharine Scarritt is an early femslash vid featuring Susan/Talia; it is on Media Cannibals/Tape3.

Claudia Christian, the actress who portrayed Ivanova, was the focus of Claudia Con, [8] and in 1996, she was a guest at Visions, a convention held in Chicago. Since then, she has appeared at many other cons worldwide.