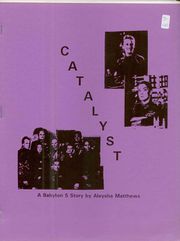 Catalyst is a 114-page Babylon 5 femslash novel by Aleysha Mathews. The pairing is Susan Ivanova/Talia Winters.

Summary from a distributor, Knightrider:

"Susan Ivanova had resisted all Talia Winters overtures and coaxing attempts at seduction but the anguish that leaked from the woman as she stumbled through the doors to the Hydroponics centre was harder to resist. Susan Iva-nova knew anguish. She also knew that, despite her reservations towards the telepath, she could not let Talia suffer such anguish alone. She decided to offer her help.

Summary from a distributor, Bill Hupe:

"Contains some '/' material, but is not the focus of the fanzine. It had been a gesture of kindness -- and assurance that the weary telepath was not alone -- that someone cared who would better understand that fear and loneliness than Ivanova. Life and work went on as usual on Babylon 5, or so the Lieutenant Commander believed, but as unexpected trouble arises, the tie between Susan and Talia cannot be so easily ignored or denied. And so the adventure begins."