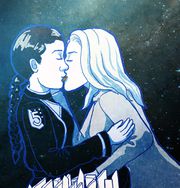 "We had it growing since the very first episode of the first season. The relationship was about all of that mutual antagonism that really means they're attracted." [1]

The relationship between Ivanova and Talia is a textbook example of belligerent sexual tension. Ivanova, whose mother committed suicide after having her telepathy suppressed by the PSI Corps, was immediately suspicious of Talia, a telepath loyal to the Corps. During the first two seasons of the show the two slowly grew closer, their relationship culminating with Talia spending the night in Ivanova's quarters.

When Andrea Thompson, the actress who played Talia, decided to leave the show, the relationship was brought to an abrupt end: Talia was revealed to have been a brainwashed spy who had only been trying to get close to Ivanova.

Even though the nature of the relationship was still ambiguous when it ended, there was a scene later in the series where Ivanova confessed having loved Talia. 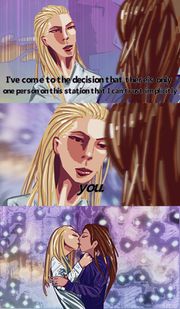