Rogue Sanctuary was a fanfiction femslash archive for Susan Ivanova and Talia Winters.

It is documented here as part of the OTW's GeoCities Rescue Project.

The fanfiction was mostly linked off site to other archives or the authors' own pages. 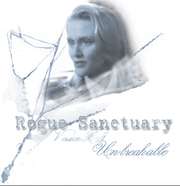 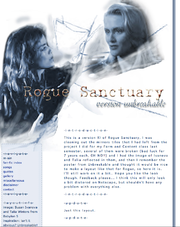 Lyrics from popular songs, e.g. Ladies and Gentlemen We Are Floating In Space by Spiritualized and Damn, I Wish I Was Your Lover by Sophie B. Hawkins.

A gallery of [fanart], including drawings, photomanipulations (wallpaper and banners), chibis and cartoons by:

Versions of scenes from episodes re-written in different accents, i.e.