The Pink Rabbit Consortium is a multifandom archive for fanfiction depicting romantic relationships between women. It started out as a mostly Xena archive that pretty early on had a Buffy and Alien Resurrection section (the Ripley/Call dynamic attracted some subtext fans) but also f/f fanfiction for a number of other fandoms.

The three biggest fandoms represented are Stargate SG-1, Xena and Buffy. All of them have their own archive page. Fanfiction for other fandoms is collected on a multi media fanfic archive page (formerly The Subtext Zone).

In addition to fanfiction the site features an art gallery and a huge collection of subtext links.

As of 7-29-99 the Pink Rabbit Consortium stopped accepting Xena fanfiction from authors who hadn't previously been associated with the site.[1]

After a great deal of thought and consideration, I've decided that Pink Rabbit will no longer be accepting Xena fanfic from new authors. The site will continue to accept Xena stories from folks who already have stories archived on the site, and non-Xena f/f fanfic is very definitely wanted from any and all. There are so many Xena fanfic sites out there for alternative stories that I don't feel like it's cutting off a much needed source [...] New authors are welcome and in fact invited to submit stories from other fandoms. I'll consider anything from Voyager, to Stargate to The Practice or Law and Order, and anything else you can think of.

And the future? Well, I'm hoping to broaden Pink Rabbit's scope and make it more of a multi-media site as well as adding more information on web design and web art geared specifically for fan sites. Xena has brought fans of f/f romance and fanfic out of the closet (so to say), and I'm hoping to go on providing a broad array of choices as well as links and information.[2] 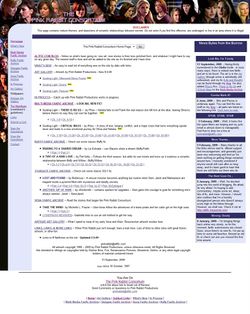 In 2000 the archive moved to altfic.com. The URL shows the close connection to the Xenaverse. Alt or Altfic, short for 'alternative fiction', originated in the Xena: Warrior Princess fandom where it is the preferred term for Xena/Gabrielle fiction.

The purpose of the archive was always to present fanfiction with strong female images with a special emphasis on female/female fanfiction. What has changed are the fandoms the site was particularly looking for and the list of things they wouldn't accept has expanded over time. Not allowed were hard core pornography, male/male slash, brutal rape, stories with no strong female characters, Joxer (but only for a while), real people fiction, Mary Sue stories, and sex involving any underaged participants. What they were looking for was:

At present, the site is no longer accepting fiction submissions.