From Fanlore
< Xena
Jump to navigation Jump to search

Xena/Gabrielle is the romantic pairing of Xena and Gabrielle, the two main characters of the television show Xena: Warrior Princess.

1996 also saw a growing awareness among fans of the subtext, [....] The focus of many heated discussions during the series' first year, the subtext nevertheless soon gave birth to a genre within the fanfic known as alternative or alt fiction. These were stories which added a romantic element to the relationship between Xena and Gabrielle, depicting them as lovers or potential lovers. Shared at first exclusively through private mailing lists, alt. fiction emerged into the fandom at large in the Fall of 1996 with the premier of Dax's OBSESSION page and the release of alt. classics like her own LIFE FROM DEATH and Bat Morda's BROKEN ARROW. Inspired by the show's subtext, alt fiction would quickly become a favorite with many Xenites, helping to legitimize that view of the show within the fandom and encouraging an understanding among fans that helped to eliminate much of the early dissent.[1]

"All this subtext crap is pure bull. Xena's no lesbian."


"Why do people assume that strong women have to be lesbians?"


"You people are just fixated on Xena's sex life. Why don't you get a life of your own?"

The Subtext FAQ went on to quote various members of the writing staff and TPTB as to whether or not the subtext was intentional, as well as describing key X/G scenes and interactions that contained lesbian subtext. Both Lucy Lawless (who played Xena) and Renee O'Connor (who played Gabrielle) are quoted at some point as saying that they believed Xena and Gabrielle were soul mates, or married.[3][4]

However, no matter how good the arguments were, they didn't really protect subtexters from attacks. Given the fact that for many subtexters, it wasn't a random favorite pairing that was under attack, but their own sexuality, they needed a safe space to discuss the pairing and connected lesbian issues. Thus, a secret women only, invitation only mailing list was created that became the invisible driving force behind the scenes of X/G fandom.[5]

Later, the Janeway/Seven pairing on Star Trek: Voyager would become popular with many Xena/Gabrielle fans and writers.

A fan in 2002 commented on tensions between altfic and other fans of f/f:

This isn't necessarily related to Uber Fan Fiction, but I got a call for papers and it sounds like an interesting project. Usually these books only talk about m/m, but with all the bisexual and lesbian women in slash fandom today it's likely that f/f will be covered as well. However, there seems to be a harsh dividing line between Xena f/f and the f/f fanfic of other fandoms, so I doubt that any slash reader is going to talk about altfic. Maybe you know someone who would be interested in contributing something for the Xena part of the fanfic realm. It would be a pity if altfic wouldn't be represented.[6] 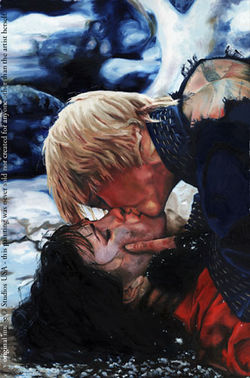 Artist: Kara Stenberg. Title: The Last Kiss. Artist Notes:"30"x20" oil painting on canvas I did to commemorate, personally, the end of one of my favourite television shows. Time took: approx. 1 working week." Note the attention paid to the brush strokes that give this painting a dark and gritty feeling to match the mood of the scene. Additional fanart can be found in the gallery to the left.

Much of Xena fan art was posted online, and sadly many of the art galleries are now offline. A few remain, and some Xena/Gabrielle art can be found on Deviantart (such as the group Xena Fan Club) or Livejournal (such as the community Xena Art).

One of the popular themes of Xena/Gabrielle fan art was their mentor/mentee relationship [examples needed]. Illustrations of them traveling together on their adventures or fighting were common, along with more sensual and romantic imagery. More darker fan art focused on what many fans believed would be their ultimate fate - dying together side by side. One of the more controversial art pieces was Betty Elaine Bradley's oil painting of the Xena and Gabrielle being crucified together on one cross:

"Betty's newest picture is currently unreleased and is an exclusive to The Martman Speaks. I want to thank her graciously for giving this painting to me. There's a reason I'm not putting it on the main page, though. The painting is somewhat shocking, and may be a bit much for people with weak stomachs. VIEWER DISCRESSION IS ADVISED!! The picture depicts Xena and Gab dying on the cross together (literally as well as figuratively), and though its a somewhat disturbing image, it validates what Xena prophesized back in OAAA: "Even in death, I will never leave you." "[7]

After the series ended, with the death of Xena, fan artists also began focusing on their parting kiss and scenes of mourning, much like K. Stenberg's "The Last Kiss."