You may be looking for the Star Trek:TOS novel The Mirage 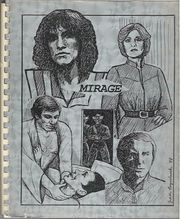 Mirage is a gen 191-page anthology of stories by Jean Graham. It is revised from stories originally appearing in B7 Complex with 74 pages of new material.

The cover is a silver, iridescent card stock and by Judith Boguslawski and other art is by Deb Walsh, J. Arlene Gogan and Michael Williams.

From the flyer: "Two years after Gauda Prime, Avon escapes Servalan's prison, and hunted by both Federation and Rebellion forces, sets out to recover Orac and the surviving members of Scorpio's crew. His acquisition of the prototype camouflage ship, Mirage, sets off events that could trigger a galactic war -- and the ultimate downfall of the Federation."

Mirage by Jean Graham has a nice balance of characters in a PGP setting. Tarrant gets a story of his own, plus some love interest, & figures in 22% of this strongly plotted 191p. zine. Very well-written, one of the best PGP fan novels to come down the pike in a LONG while. It passed my own acid test which means that I read it more than once & enjoyed it both times! Stories originally appeared in B7 Complex, now with 70 additional pages, spiral bound, illos by Walsh, Boguslawski, & Williams. [3]