You may be looking for Spacefall (Blake's 7 novel by Fran Ward).

Spacefall is a gen Blake's 7 anthology published in the UK. It is the fiction zine of the Seveners Club.

Spacefall 1 was published in 1978 or before.

Spacefall 2 was published in 1978 or before. 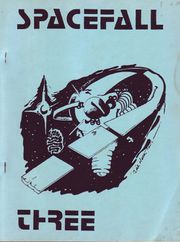 Spacefall 4 is undated but was published in 1980. The cover is by Paul Mark Tams. 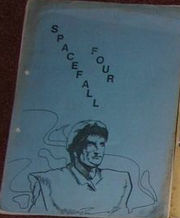 cover by Paul Mark Tams of the edition with the two stories, and a third story or possible poem 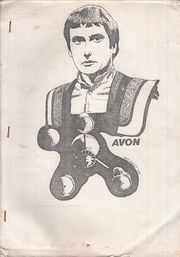 inside art by Marty West

Regarding the story Between Black and White and the trope, Avon's Allergies:

This story was written in 1978, and published in "Spacefall" #4. The story was later rewritten by Ann O'Neill and published in Standard by Seven #9 in March 1981. In that zine, the only author listed is Ann O'Neill. In 1985, the author of Mascarada, Susan R. Williams, acknowledges Ann O'Neill and "Between the Black and White" in her own story "The Portage," saying that the original "plot device" of having Avon's allergic reaction to interrogation drugs was in O'Neill's story. In 1986, the story was bootlegged and sold as a novel "written by Keith Black."

Spacefall 5 is undated and contains 69 pages. 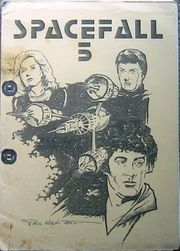 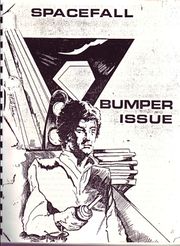 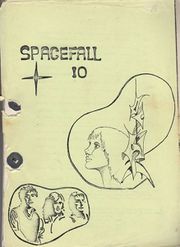 Spacefall 11 contains 61 pages. The cover is by Carole S. Fairman. 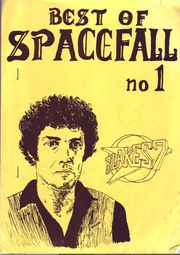 cover of Best of Spacefall #1 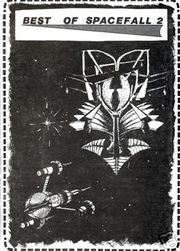 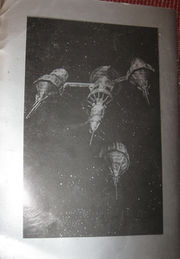 back cover of Best of Spacefall #2, Danny Dresner

The front cover is by Heather Lulham. The back cover is by Danny Dresner. The interior artwork is by Tim Pieraccini, Fliss Davies, Jacqueline Rachel, and Kathryn Andersen.