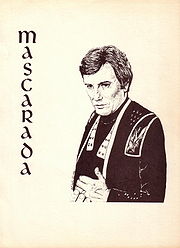 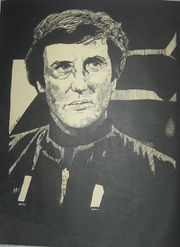 back cover, by Pat Cash

Mascarada is a gen Blake's 7 119-page novel by Susan R. Matthews. The art is by Pat Cash.

The zine also contains a poem by Sheryl. The poem indirectly comments on the then-recent death of a fan, Beth Nugteran, in a multi-casualty car accident caused by a drunk driver.

This zine also includes a short story by Susan R. Matthews called "The Portage." It is an Avon hurt/comfort fic. Matthews comments on an element of borrowed fanon in the preface.

It is part of a series that was published separately, and then in 1989, as a single volume:

Comments by the Author About Borrowed Fanon

In 1985 and 1986, there had been several instances of a fan named "Keith Black" selling bootlegged copies of Blake's 7 zines, one of them of the fic by Ann O'Neill called "Between Black and White" (see Between Black and White). This may have made fans extra-sensitive, including the producers of "Mascarada," to any possible raised eyebrows regarding fanon, head canon, and canon and the subject of Avon's allergies.

Susan R. Williams included this statement in the preface to the story "The Portage" in "Mascarada":

The first person to suggest that Kerr Avon had a sensitized allergy to standard drugs used for purposes of interrogation was Ann O'Neill, in her excellent story, "Between Black and White" (Standard by Seven, Number 9). The idea made such good sense to me at the time that, to my embarrassment, I find I had unconsciously assumed it was part of the "background" established for Kerr Avon in the course of the aired episode. I understand that the idea was original with Ann O'Neill, who has graciously consented to lend the plot device to me for the limited purposes of this story and its eventual conclusion. I feel the richer for it, and wish to thank Ann O'Neill, as well as acknowledge the source of the idea.

Mascarada is a very very good AU story built around the relationship between Avon and Blake - with one enormous flaw.

Any fan of Avon-torture must enjoy this one. The whole premise of the story is built on his suffering the most appalling agony at Servalan's hands - to put it as non-spoilingly as possible, the torture is almost entirely mental and emotional, and tied very tightly to the close relationship - the love - between him and Blake, which is turned against them both. And the story follows the results of that torture.

Both men are well-written (though I would have preferred a little more reserve in Blake, who was a *touch* too sentimental over Avon for my tastes) and the fierce bond between them very believable. The other characters are quite well-done, especially (in my opinion) Tarrant, who comes over as brash and irritating, but also quite likeable and sympathetic, not an easy mixture to achieve. Vila is a little duller than I like him, somewhat humourless, but not too bad. Servalan is even nastier than in the series, a mixture of sadism, slightly decayed sweetness and steely calculation, and she and her subordinate, who supervised the torture, share some rather enjoyable if psychologically ugly scenes.

Now. The flaw. For the first time, I found myself thinking 'this would have been better as slash.' Cally - one of the three major characters, as central as Avon and Blake - is in my opinion *dreadfully* written (and in a good story, a flaw like this stands out all the more). She starts off by being sullenly dull, and half-way through turns placidly dull - positively bovine. And so the Avon/Cally relationship falls as flat as a three-week-old pancake; even he is duller in their scenes together. There is so much more real emotion in the Blake-Avon scenes that it makes the 'romance' slightly ludicrous to me.

A lesser fault of the story is its slightly humourless quality. The blend of angst and humour that helped make the series so fascinating is admittedly very hard for writers to achieve - especially with an angst level as high as in *this* story - but I did miss the humour that the TV Avon and Vila, especially, could inject into the most grim of storylines. There were odd attempts at humour - especially the end - but they didn't work as well as the drama.

Nevertheless, if you like to see both Avon and Blake put through the wringer, physically and emotionally, as thoroughly as possible - lots and *lots* of hurt and some comfort to sweeten it at the end - this is definitely worth reading and re-reading.

There are two sequels to "The Mind of Man" and both have some good points, but are inferior to the first. Mascarada has a quite well-done Jenna, a nicely twisted Dorian, and a mildly dull plot. And the third one Shadowplay has some of the best ideas of the three (a dangerously desperate faux-Scorpio crew, and Avon being forced to relive the worst moment of the torture from the first - this *should* have been explosive) but the whole work is so diffuse, the characters so bland (even Blake and Avon are almost placid this time around, and Cally - tranquil to the point of stupefaction and hugely pregnant in the bargain - has nothing in common with the TV character but the name) that these threads can't have the impact they should have. It also introduces Avon's small son. There ought to be a rule banning this - I have yet to see a story where giving Avon children wasn't a mistake. [1]

DOUBLE-EDGED SWORD and MASCARADA. Again, a predictable choice. I'm a bit different in that I prefer Mascarada to DES...Avon gets a bit "soft" in DES and I think he regains his "edge" in Mascarada. For some reason, I didn't care much for SHADOWPLAY, the last part of the triology...perhaps because Cally got relegated to "pregnant lady" status. [2]

I think the second novel, MASCARADA, is less soppy than DOUBLED-EDGED SWORD. I love DES, mind you, but some of the interactions between Avon and Blake do come rather close to soppiness. This is much less true in MASCARADA, where Avon and Blake very nearly have a fist fight within the first twenty pages or so. In some ways, I prefer the second novel for that very reason...it has a lot more of the "edge" that I like in the series. [3]

I recall Mascarada being rather boring (the title is better than the story). In Shadowplay it was heartening to discover Avon acting like a relatively normal if rather restrained human being when children were around. The detail of Cally's pregnancy could have been curtailed, yet it was nice to find a fanwriter with the courage to write about it. [4]