One well-know vid they created was Data's Dream, a multifandom vid.

Gayle and Tashery both vidded with other vidders under other names; see also Sarran Songs.

Like most vidding groups of the VCR-era, songtapes were created on a "as needed" basis. New vids were added to the tape as they were created. Multiple versions of their songtapes circulated among fans in the 1980s and 1990s. The vidders took great pains to control the quality of their vids, asking that fans contact them directly rather than getting a degraded copy from a friend of a friend. Unlike most vidders of the time they did not charge for the costs of the tape and postage. Instead they sent them as gifts to subscribers of the Rainbow Noise newsletter or accepted blank video-cassette tapes in return.

In 2005, Morgan Dawn digitized a selection of their Blake's 7 and Wiseguy vids from their master videotapes and offered them briefly on DVD. 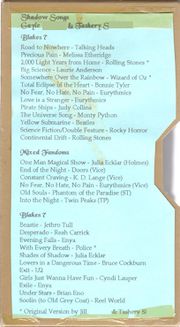 one of their songtapes from the 1990s

In 2017, Morgan Dawn digitized additional copies of their songtapes. After viewing them, so many years later Tashery wrote:

"Gayle and I noticed this difference in our editing: when a new line began a new image sequence, Gayle cut the image in when the singer started singing. I cut the image in on the beat. Maybe more obviously, Gayle's editing responded more to lyrics and mine more to music, but there are big exceptions to that. Look at what Gayle did with the Universe song! To me, the beginnings of lines/image sequences is the surest way to tell Gayle's solo work from mine. More sure than theme or music, since we exchanged ideas and used songs recommended by each other. Vidding together we'd take turns putting in alternate cuts so out collaborations have both kinds of timings about equally. Jill's editing was to the beat, too, and in other ways I don't think I could now tell Jill's and my editing, in the 2 VCR days, apart."[1]

All vids below are credited to Shadow Songs (Gayle and Tashery) unless otherwise indicated: