The Enterprise Papers: Warp One

The Enterprise Papers: Warp One is a 30-page Star Trek: TOS zine published in 1971. 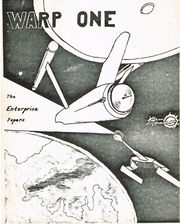 The editor had planned on there being future issues of this zine, but it appears this was the only one.

According to The Strekzine List, its contents are "off-beat, unusual, mixed, and non-morbid."

There was submission request for this zine in Impulse #2, and Boldly Writing states that it was reviewed in Deck 6 in April 1971.

A word of explanation: My staff has the disturbing habit of refering [sic] to me as the "Editor." I do not have, nor have I ever had, any fondness for the term "Editor." Personally, I would prefer "Tyrant," "Dictator," or "King," except that in my case it would have to be "Queen."

A Bit of Transformation

Many thanks to our models who sat for many long hours as our team of talented artists made them look like someone else.

Is STAR TREK dead? The resounding chorus from fandom is "NO!!"

And fans are very busy proving their point. STAR TREK clubs abound, fans write new scripts for the defunct show, and trade memories, and write each other in ever increasing numbers, and play STAR TREK trivia, and generally prove themselves to be totally illogical to the rest of the sane world. Why do they keep it up? Because STAR TREK is just as good the second time you see it as the first, and the third time is even better.... because the characters are so real they transcend the barriers of the show itself and become entities in themselves. Just because we no longer SEE them, doesn't mean they aren't still up there, in the ENTERPRISE, boldly going where no man has gone before! So, here is our contribution to the still steadily increasing mass of STAR TREK amateur material that is being created even now. Those of you who are fans already know what I'm talking about, and as for the rest of you... START WATCHING STAR TREK RERUNS AND FIND OUT WHAT YOU'VE BEEN MISSING!!!!!!!!!!!!!!!!!!!!!!!!!!!!!!!!!!!!!!

Any typing errors noticed are not my fault but caused by a nasty bunch of Gremlins who inhabit my typer. Don't let them fool you -- they are really a bunch of hardened characters who 5y8ht 5y36 i hn23fgkiw93, kkk qhe w9 rue9 i88 psos99 jdie, dkdkd lsl.... er.....

An Opportunity to Get Into Fights?

Question: would it be worthwhile to try to start a STAR TREK information bureau? For those of us who play ST trivia, write ST stories, and generally get into fights with other fans on the name of the stuck-up Romulan in "Balance of Terror" and other such silliness, it is almost a necessity that we keep our own piles of info at hand. And for those of you who are about to make THAT objection, let me remind you that the CONCORDANCE did not record ALL the info that ST put on the air -- it couldn't unless it were the size of an encyclopedia. An info bureau would be used to find those choice bits that no one thinks they can find out... Simply let the members of the bureau know that you need such-and-such fact, and SOMEONE is bound to have just what you are looking for!

Write Us a Dirty Note

I hope to start a few contraversies [sic] with this zine, so if something we say here gets your dander up, don't just sit there and stew, write us a dirty note. I won't promise to print all of them, but I do promise to print the more entertaining and/or literary ones. And if you like something... well, I won't insist you write, but we appreciate it almost as much as cash! And let us know if you have something you think we might want to print. This should be chiefly a zine to show off the creativity of ST fans. We particularly like artwork... hint, hint!

31 pages. Fair repro: mimeo with photo-process cover. 50 cents from Ellen Anne Pearce [address redacted]. This is an odds-and-ends zine, heavy on the linos (which are mostly running "gremlin" jokes). The 'Occult Corner" features a card reading for Spock, and there is an eight-page letter from Amy (Mrs. Leonard) McCoy; this issue contains no other articles or stories. To my mind, the best part of the zine is the poetry (and it is good poetry, especially for a first-issue fanzine). The rest of the zine consists of editorial pages (some more serious than others), a how-to-attract-a-Vulcan piece, an identify-this-line quiz, various ST fact pages (which the editors hope to expand into a ST info bureau; looks like they have a good, interesting start), and the inevitable you're-getting-this-zine-because page. Assuming the usual improvement with experience, this should be an interesting, off-beat series of zines. [1]