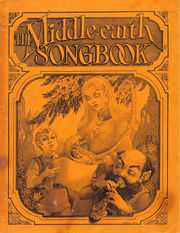 The Middle-earth Songbook is a 130-page zine of Tolkien filksongs. It was dedicated to Marrion of DragonsHead. It includes songs set in the world of J.R.R Tolkien, including Marion Zimmer Bradley's The Rivendell Suite, used by Bradley's permission.

From a 1976 flyer: "An anthology of songs and music of Tolkien's Middle-earth—including the Rivendell Suite by Marion Zimmer Bradley, and an entire musical play based on THE LORD OF THE RINGS. 130 pages, photo-offset. Edited by Ruth Berman, editor of The Star Trek Songbook; Co-edited by Ken Nahigianj. Published by the A.R.C. Science Fiction & Fantasy Club; With art by Tim Kirk, George Barr, James Shull, Jim Mcleod, and others."

Some chording added by Ruth Berman.