Tolkien Journal is a gen anthology of reviews, articles and art about J.R.R. Tolkien. For three issues, it was a dual-publication with Orcrist.

Tolkien Journal 1 was published Spring 1965 and is a single sheet of paper, printed only on one side. 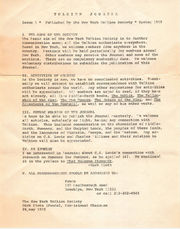 It consists mainly of club rules and expectations for the journal.

v.1 n.2 was published in "Winterfilth 1965" and contains 3 pages, printed on one side. This issue contains a short bibliography of articles by Alexis Levitin "of interest to Tolkien fans." 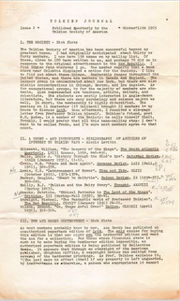 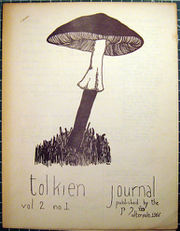 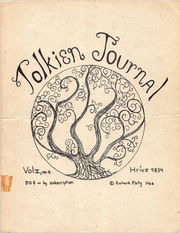 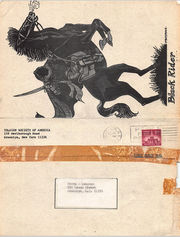 We are sad to report the rumored demise of Entmoot, our sister Tolkien magazine. Greg Shaw, its publisher, has reportedly not found the time or motivation to continue his noble effort. It is a great loss if Entmoot will not appear again, for it helped to fill the gap between the Tolkien Society and science fiction fandom.

Hopefully, the gap will be filled, at least occasionally, by I Palantir, the official organ of The Fellowship of the Ring, the oldest extant Tolkien fan organization. I Palantlr appeared recently for the first time since 1964, and only the fourth since the founding of The Fellowship in 1960, Bruce Pelz complains that his hang-up was material, I Palantlr has been a rather more elaborate publication than either Entmoot or the Tolkien Journal. Issue U contained a cartoon-format version of the Journey through Morla, several articles on Tolkien fandom, and a musical comedy "pirated from many" entitled Hello Frodol. Perhaps the best thing about this play Is the cast, which Includes the Beatles as the four hobblts, Rlngo as Frodo; Boris Karloff as Gandalf; Tom Smothers as Sauron; and the Rolling Stones and the Animals as the Nine Nazgul. The Fellowship is a somewhat exclusive organization; membership costs one dollar plus approval by Bruce Pelz. The latter is somewhat difficult to obtain, but for those who have a photographic knowledge of the books, it may be worth a try. Bruce Selz's address is Box 100, 308 Westwood Plaza, Los Angeles. Don't a try. Bruce Belz's address is Box 100, 308 Westwood Plaza, Los Angeles. Don't write Just for the sake of writing; Bruce won't appreciate it.

Also, Niekas is still going strong. At fifty cents the copy, its probably the best buy in science fiction fandom. It was nosed out at the World Science Fiction Convention by ERBdom. the Edgar Rice Burroughs fanzine, but this was largely due to bloc voting and a special issue of ERBdom. It (Niekas) has Tolkien and Gilbert & Sullivan news as specialties, with the normal run of SF news as well. Write Felice Rolfe... 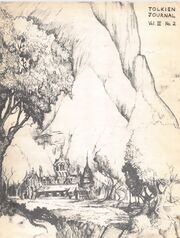 Tolkien Journal v.3 no.2 was published in 1967 and contains 22 pages. All art is by Tim Kirk. Richard Plotz, ed. Front cover by Tim Kirk - Last Homely House at Rivendell & "The Passage at the Dead Marshes"

Tolkien Journal v.3 no.3 was published in 1968 and contains 15 pages. Edited by Ed Meskys. 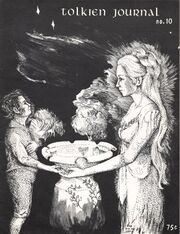 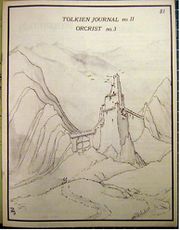