The LNNAF Journal was a fan club zine.

For a list of similar zines, see List of Star Trek TOS Zines Published While the Show Was Still On the Air.

LNNAF Journal 1 was published in the summer of 1967. 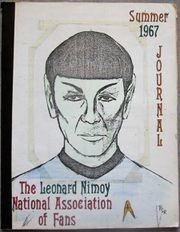 From a blurb in Chatter Boxes #2: "Our first LNNAF Journal will be issued in July. One of the articles which will be featured is an "Open Forum" in which LNNAF members are invited to express their opinions on a given subject. The subject of the first "Open Forum" will be: "What do you like best about Mr. Spock" -- and members are urged to submit their opinions for publication no later than May 31st."

LNNAF Journal 2 was published in Winter 1967 and contains 40 pages. 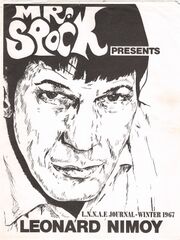 This issue includes photos of Leonard Nimoy as himself, as Spock, and in other movies including "Deathwatch" and "The Balcony." Also contains the article about LNNAF president Peggye Vickers' visit with him in Hollywood, articles by fans who attended personal appearances; and his answers to members' questions.