This company was owned and operated by David Gerrold. It was through this company that Gerrold sent out at least one open letter, see Bring Back Star Trek...?.

Trademarks, copyrights, and such must have been much looser as Gerrold was able to make a profit using things that straddled lines between fanworks and official "goods." In a 1972, he stated: "Tribbles are the exclusive creation of David Gerrold, all rights reserved." In 1974, he said that it was "all licensed by Paramount, by the way." [2] 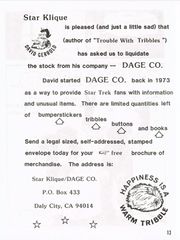 It had some sort of relationship with Star Klique. [3] This ended in autumn 1983, when the club folded.

In the 21st Century, a mail order firm Tribble Toys has the Gerrold approval to sell tribbles and, from Star Trek: The Animated Series, glommers and pink tribbles. Gerrold's books are also available from the site.

Some Comments by Gerrold: 1974

A: Okay, Dage Co., is a fan-oriented company that I own, I do not run it. Presently, it is being run by Ms. Linda Wright, who also doubles as my secretary and Head Troll.

Dage Co. was started when I began receiving fan mail at the rate of 100 or more letters per week from STAR TREK fans who wanted information about conventions, fan clubs, fanzines, tribbles, phasers, communicators, and so on. (Enclosed are copies of our information fliers. I wrote the one "Bring Back STAR TREK....?" and you may reprint it, if you wish.)

I have always felt that anyone who took the time to write a fan letter should get some kind of reply, even if it's a form letter that says, "I don't have time to do any more personal than this, but I did read and appreciate your letter." I do read all of my own mail — except when they are obviously STAR TREK story submissions. For legal reasons, those have to be returned unread.

Dage Co. is set up to handle all of my mail as quickly and efficiently as possible. Most letters are answered within a week. Some of the ones that require more personal answers take a little longer, (There was a time when I tried to answer them all personally, but there are far too many for me to take that time any more -- my first responsibility is to my writing, otherwise there wouldn't be any books or TV shows for anyone to be a fan of.)

Dage Co. pays for itself by selling tribbles, books, bumper stickers, buttons and photos. (This is all licensed by Paramount, by the way.) This may seem a little mercenary, but last year, I spent more than $1200 on postage alone, answering the letters of more than 7000 STAR TREK fans from all over the USA, Canada and parts of the rest of the world, who have read my books and written to me for more information. Were it not for the sales aspect of Dage Co., I would not be able to answer any of this mail. If you'll look at the fliers I have enclosed you will see that they are as much information for fans, as they are advertising. As far as I know, Dage Co.is one of the few fan - oriented companies that cares this much. (Bjo Trimble's Mathom House Enterprises, which sells STAR TREK Concordances, is the only other one I can think of off hand. Unless you count S.T.A.R. -- but I think of them as a fan club.)

In 1974, Cara Sherman (the editor of Romulan Wine:

I'd tell you what I think, but greed speaks for itself. [5]