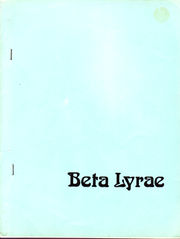 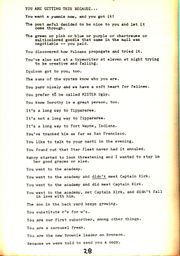 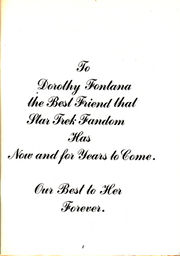 dedication from the zine

The name of the zine comes from the Larry Niven episode, "The Slaver Weapon," in the animated series. In it, "Beta Lyrae is a double star system we thought appropriate for a two-editor zine."

From the title page: "Our apologies: The article by Bjo Trimble is not included in the zine. Bjo is an extremely busy lady and, as much as she would like to, has not been able to complete it. We realize that her other activities must take priority and hope that you, too, will understand."

The zine included a entire page of acknowledgements. Some include:

This zine is dedicated to Dorothy Fontana: "The Best Friend that Star Trek Fandom Has Now and for Years to Come. Our Best to Her Forever."

"Our express thanks to Bjo Trimble — the grand lady of fandom who gave us the kind of encouragement that we needed when we needed it. She truly deserves all the accolade we can give her. Thanks go to John Trimble — The silent one in the background who thinks up the ideas for Bjo to put into action.

"Many, many thanks to David Gerrold for his terrific, fantastic, beautiful, and humorous article, and also for the Selectric I, the golfballs, his insanity, and for any other miscellaneous things we can accuse him of."

"Thank you to Alicia Austin for her generosity in allowing us to use these brilliant examples of her artistry."

The Editorial: "We Speak to You"

In the aftermath of Equicon, a committee member did one of several things — they either gave up Star Trek completely, hide in the basement of attic for weeks, went totally insane, or decided to get totally involved and start a fanzine. Somehow, I ended up doing the latter. At any rate, here is our effort, for whatever it is worth. To me it means a great deal. If this turns out the way we had it planned, it is the best zine that we could possibly do. That's the way we look at it. I don't want to spend a lot of time telling you all about why we did this because too many first issues take up the entire zine with all that.

My personal thanks go to my sister who waded through mounds of paper and orders for several months, and to my cat who tolerated my typing at all hours. Special thanks to Linda Wright who is some kind of a saint for listening to my woes and miseries every time we were together. And thank you to those great people out there who make doing this a pleasure and who gave us something to base this on. AND to all of you who can at last read this — my wish to you that you truly enjoy this as much as I enjoyed doing it. The complications that we ran in to could fill the entire zine.

As my co-editor has already explained, Beta Lyrae is the result (aftermath) of Equicon and a good case of insanity, at least on my part. Right now, I thank all those who put up with my insanity.

I won't say that putting this together was easy -- no project of this magnitude is -- but it was fun. I hope we've put out something that not only you will enjoy and we'll be proud of, but most importantly that Dorothy will be unashamed to have her name on. For, besides all her many and varied achievements, Dorothy Fontana is simply — in the words of a friend -- "nice people".

The printing on this fanzine is truly beautiful. The issue is dedicated to Dorothy Fontana and contains a long interview with her on her Star Trek work and her other professional jobs. Her own life comes out in the interview, too. Altogether, it is a good job done by fans of Miss Fontana. There is also an Alicia Austin portfolio and some Filmation drawings, courtesy of the studio. This is the first issue... 'Beta Lyrae' is a very nice fanzine, and I enjoy having a copy, but unless you are interested in the background of the show or Alicia Austin artwork, this fanzine will not be of overwhelming interest to you. [1]