You may be looking for Five Year Mission and Beyond.

About: From the Editor

Once upon a time, a very long time ago now, about 1973, I read about the existence of something called Star Trek fanzines in a couple of books by David Gerrold, most notably The World of Star Trek. In November or December of that year I put together my own zine, 2-5YM, which was short for Second Five-Year Mission, something we Trekkies all longed for back then. That five page ditto led to my meeting my friend, a young English teacher who later became a librarian. Soon we merged with STAR Syracuse, the local Trek club. We continued to publish 2-5YM until 1977, by which time it was published by offset press, if I recall correctly. At least a few issues in between were done by mimeo, typed for us by a little old lady in Fayetteville. [1]

A special issue (published in June 1974) contains 17 pages and has an interview with David Gerrold. 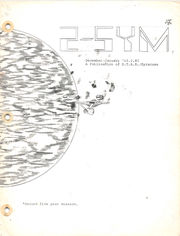 This is listed on the cover as "Vol.2,#1", but listed on the title page as "Vol.1, #5 (Special #2)". (The internal text of this issue says we are missing issues #1 and #2.) It has 16 one-sided pages. This issue includes an editorial on starting your own Star Trek club, news, and essays on: Klingon Heavy Cruisers (with drawings); Concerning Tribbles; Time Travel in Star Trek; How to Make a Starship; and Impulse Engines.