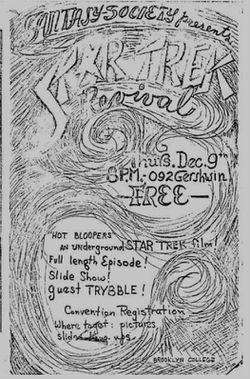 It took place on a Thursday evening in 1971. The con was free of charge.

A Description and History

From Jeff Kleinbard, one of the con's creators:

Twas in A Dream

Somewhere in some no place just west of the pineal gland and east of the thousand petal lotus chakra, in darkest deep Stage IV sleep, in a twitch of a shadow of a wormhole of an infindibulum of no space and no time, one of the Elder Ghods dribbled a glistening bead of dakini come onto the sub-molecular, vibratory, quantum matrix of my sleeping brain.

Somewhere in the yet unparsed multiverse, Klingons were fighting mouse-eared imperial storm troopers with jelly bean slingshots. Kirk and Spock were making hot love. A horta was hiding behind the folds of the red queen's dress while a seven year old Khan was being scolded by his mom for "putting things in the other children's ears." The morning sun winkled through the window and I shook the Tholian web of sleep from my brow, and fitfully roused with the single thought, "We must have a Star Trek revival!"

I have noticed that when something big and juicy needs to happen, the doors open, people appear (as if out of the woodwork), and the requisite enthusiasm is mustered. This was one of those times. A Brooklynite — Alan (last name escapes me, perhaps “Asherman”) — was the first uber-Trekkie I met. His small apartment felt like a treasure chamber as he unveiled his own copies of the Bloopers, Where No Man has Gone Before, one of Spock's ears, and an actual tribble.

Alan's bone structure made him look proto-Vulcan and when he unveiled Spock's ear I felt like I was in the presence of a fragment of the one true cross. Actually it was only a latex elf-tip which fit over Leonard Nimoy's ear. (I since learned that they were manufactured and discarded by the hundreds during the series.) Nevertheless, it had a palpably numinous aura and I can now imagine it in some finely carved and jewel inlaid reliquary box, set in the niche of some yet unbuilt temple.

Alan bestowed a holy tribble on me and I dutifully installed it in a hamster cage which I set in a display window of the student union building, along with a sign, "Please don't feed the tribble."

I happily posted hand-lettered signs for a "Star Trek Revival" on the campus gates and bulletin boards. A small theater space in the basement of Gershwin Auditorium (the performing arts building) was secured. At that moment in time Star Trek was dead. The body in sickbay showed no signs of life: no plans for a new series, no movie, no cartoons, no reruns. Nothing. We expected a small, appreciative gathering of true believers warming their hands over the still smoldering coals of beloved memories.

The program was to consist of two showings of the Bloopers and "Where No Man Has Gone Before." We knew we were in trouble when this 500 seat theater filled up well before start time. The screen had a kind of apron which smoothly descended to the first row of seats. People just sprawled out on the floor atop this apron and still more people were clambering in the hallways trying to grab a spot. Larry and I surveyed the scene and then turned to each other and sighed — "If only we charged a nickel a head, we'd be rich." True belly laughs are rare but any one who has seen the Bloopers knows that it comes up a cropper of true abdominal — richter 6 — ribaldry. Somehow the content has all vanished from my memory save the episode were Kirk is poisoned by the one-horned, albino ape and subjected to the buxom ministrations of a witch/healer woman. The Blooper outtake has Spock skulking in the bushes with a bow and arrow, like an oversized cupid, who twangs Kirk right between the gonads. The captain is then ceremonially carried by a group of giggling pall bearers to the witch woman. I forget whether a healing takes place.

"Where No Man has Gone Before," with velour-draped Sally Kellerman, was a revelation in lush color, wider screen, and decent sound. Great TV science fiction had escaped the confines of the little tube and was now comfortably sprawled in large scale accommodations more suitable to its glory. It was like entering the promised land.

The mood was celebratory. Many stayed for a second screening, as for a favorite childhood story, told over and over and never tired from. The Bloopers completed their encore and we were re-starting "Where No Man has Gone Before" when Alan noticed "the scratch."

The snake had entered our garden and Alan accused Frank's projector of actually scratching his sacred relic. He called for an immediate stop. The screen went blank and the lights came up. An emergency cord had been pulled and the magic bus screeched to a halt, tumbling passengers to the cold asphalt. We faced the revelers and explained why the show must end. A disappointed and sullen crowd emerged from the Gershwin basement and we shame-facedly apologized to Alan for betraying such a heavy trust.

A few weeks later the first official Star Trek convention was held in New York City's Statler Hilton Hotel, opposite Madison Square Garden. The planners were first surprised and then croggled by the massive attendance. I was there and recognized the same giddiness first glimpsed in Gershwin's basement. It was the official start of a fannish tsunami — but I was there first. [1]