Derek is a popular character on the MTV show Teen Wolf.

Derek was born a werewolf in a family of werewolves. The first season provides tantalizing hints about his backstory: When he was 15 or 16 (the show is vague and contradictory regarding ages[1]), he fell in love with Kate Argent, a 20-something hunter who, it is implied, was using him to achieve her ultimate goal of burning down his family's house with his family still inside. The only survivors were Derek, his sister Laura, and his uncle Peter. The third season reveals another survivor--a younger sister, Cora Hale--and a previous love interest for Derek--Paige, a girl his own age (who dies, for extra sadness points).

After the tragedy he and his sister (who became the Alpha) moved away, while his uncle Peter (who suffered a lot of injuries) was left in the Beacon Hills hospital.

The show is set six years later, when Derek has returned to Beacon Hills, looking for his sister, who had decided to come back to investigate the fire. At the end of season 1, he becomes the Alpha.

Many (maybe even a majority) of fans are convinced that he was never supposed to become the Alpha[2] in the first place and even though he's trying to look like an expert on the subject, he's not. Fans also speculate about Derek's anchor, which was stated on the show to be anger[3]. The exploration of Derek's anchor, as well as its evolution, is sometimes part of fanfiction where Derek plays a prominent role.

The most popular Derek pairing is Derek/Stiles, also known as Sterek. There are also fics featuring Derek/Kate, based on their past canonical relationship. Derek/Lydia and Derek/Isaac are also popular pairings.

Fanon and Common Tropes in Fanworks

The show often places Derek in negative light (often despite of, not because of, his actions), purposefully turning him into something of an anti-hero[4] and the fandom embraced that characterization almost without question.

Many gifs circulating on Tumblr wallow in the sadness of his 100% canon tragic backstory. For example.

Fans have thoroughly explored the psychological effects of Derek's teenage self being taken advantage of by an older woman. A related issue that is addressed in some fanfic is how losing his entire support structure at a young age would not only affect him emotionally, but also prevent him from gaining access to important werewolf-specific information.[5]

As a werewolf character, Derek is also subject to the elaborate werewolf fanon that was almost entirely invented by fans and bears little relation to what is revealed on the show.

The show does not provide any information about Derek's exact age, educational attainment, or financial status, but he is shown driving a very expensive car (a Camero) and hanging around a high school during the day. It is generally assumed that he has no job, and Tyler Hoechlin's (the actor who plays Derek) speculation that he must live off his family's life insurance policy[6] has been accepted as fanon by many fans. A lot of fanfic also assumes that Derek inherited the car from Laura.

In the first season Derek is seen lurking around the burned-out shell of his family's house, so fandom assumes that he lives there, but that there is no electricity or running water. Fluffier stories may feature his new pack helping him renovate the house. Other stories show him bathing in a creek or in the rain (e.g. Sluice by GoddessofBirth).

Derek eventually gets a loft in an old abandoned-looking building; as of season four it's been made clear he owns to building. Derek's loft has been used extensively in fanworks.

It's rare that a fanfic addressing Derek's sexual history doesn't mention Kate. Some fanfics speculate that because of Kate he subsequently became sexually promiscuous as a form of self-punishment, while others assume that he swore off sex entirely. The appeal of the Secret Virgin trope has resulted in stories where other characters expect Derek to be sexually experienced ... and he isn't. For example, see Jinx Removing by DevilDoll. The few Teen Wolf stories in which Derek is asexual (see the AO3 tag) talk about his confusion over Kate as well.

Derek's trust issues tie in with his sexual history. As a result of his experience with Kate and what happened to his family it is a widely held fandom belief that Derek does not trust people. This is supported in canon by his refusal to trust people numerous times including Scott. It's usually counted as a major milestone, especially in fic, when Derek decides to trust someone.

Derek as the Alpha

When it comes to Derek's characterizations as Alpha, there are two distinct ways fans have been handling it. In the first approach — most common in fanworks created during the hiatus between season 1 and season 2 — Derek is described as a competent and caring Alpha (based on the fact that he's a born werewolf and is "supposed to" know what he's doing); the second approach shows Derek being lost and complete crap at anything Alpha-related (this based heavily on Derek's canon portrayal in season 2). The latter is often combined with Derek getting help from his love interest (most often Stiles) in making the Pack functional and becoming a better, more understanding Alpha.

Derek and Scott have turbulent relationship in canon and this is reflected in fandom. They can be at odds a lot of the time and the relationship morphs into a grudging mentor relationship. Some fans have written meta on the subject of Derek's and Scott's differing approach towards being a werewolf and why it might be putting them at odds[7]. 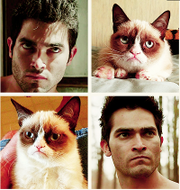 In fanworks, Derek is often portrayed as grumpy, or at least other characters interpret his mood that way. Stiles Stilinski refers to Derek as a "sourwolf" in one episode, but in fanfic Stiles calls him a sourwolf all the time.

On Tumblr, the Grumpy Cat meme inspired comparisons to Derek starting within a day of the original Reddit post on September 22, 2012.[8] The "Derek Hale is the grumpy cat" photoset, posted three days later by stereksextape, has become legendary.[9] The post had almost 25,000 notes as of March 26, 2013 and was retweeted by one of the actors on the show.[10] See also I'm the Alpha Meow (posted September 27, 2012) and Lost Sourwolf Comic-Con flyer (posted October 12, 2013).

Common fanon holds that Derek and Laura moved to New York after the fire, and backstory fics or canon AUs are often set there.

Derek being able to transform into a real wolf has been a popular trope in fandom for a long time. It became canon at the end of season four. This marks one of a few times that a fandom trope actually became canon on this show.