Muskrat Jamboree is a fan-run multi-fandom slash convention in the Boston area. The first Muskrat Jamboree was put together in just three short months, originally described as a "semi-con" -- perhaps because brooklinegirl was trying to keep things simple / keep expectations low. It quickly grew into a popular East Coast slash con, with a membership of 150 attendees.

As many of the organizers were in Due South fandom in 2007, the con was named after a small-town festival in Inuvik: "Every year Inuvik hosts the Muskrat Jamboree. It's a variation on any of the thousands of community festivals held across Canada each year."[1] This name was initially offered to prospective con-goers as a joke, but it was overwhelmingly the most popular option, so the organizers took it and ran with it.

Registration is limited to 150 people. Fans must be at least 18 years old in order to attend.

The first MJ took place in March of 2007. It featured two days of panels[2], a party, and a vidshow[3]. While the con was going on, those who weren't able to attend were invited to participate in Rat Jam, an online discussion forum at livejournal. [4].

Among MJ 1's unexpected highlights were the goody bags that were given to everyone at the con, which featured all kinds of Canada paraphernalia, maps of the Northwest Territories, temporary tattoos of rainbows and hearts and the Canadian flag, and individualized dogtags printed with each con-goer's name. There was also a game of Canadian Jeopardy (see image) organized by helleboredoll.

The wildly popular Pretty Boy vid by strangecobwebs -- focusing on the many faces of Paul Gross; described as "Paul Gross Is His Own Damn Fandom, Thank You Very Much" -- premiered at the MJ 2007 vidshow.[5] That vidshow was temporarily delayed by technical issues, but the attendees happily amused ourselves singing "The Last of Barrett's Privateers," which most of us knew because we were due South fans and Paul Gross sings part of that song in a pivotal episode of that show.

The concom shared a hotel suite, and that was the con suite the first year. On Saturday night of the con, the party in the con suite got so loud that hotel security showed up.

The second biennial MJ took place April 3-4 2009. (In alternating years, the concom encourages congoers to attend Con.txt in the Baltimore area instead.) 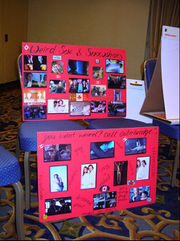 2009 panels included fandom-specific options including "Tinhatting McShep" (Stargate Atlantis), "Mutual of Omaha!: The Middlepanel" (The Middleman), and "Making it New and Making it Last (aka: Hello, it's been fifteen years since they aired the Due South pilot! And Fraser? Still delicious!)" (Due South) alongside meta panels including "Little Black Dresses and Why We Love Them," "The Linguistics of Fandom," and "It's Alive!: What Keeps Closed Canons Open to Fandom?"[9] There was also a panel called "Weird Sex and Snowshoes" (C6D -- see image.

For MJ 2009, we upgraded both budget and hotel, and had an actual con suite with actual food and an actual bar! We had more fangirls, an equal amount of fun, and possibly more booze![10]

The 2011 panels, announced on February 18, 2011, were suggested and then chosen by con attendees. They included "Is That A Muskrat You're Jamboreeing With, or Are You Just Happy to See Me? (Due South Diaspora)," "We need a cool panel name. Like Strike Force. Or Hawaii Five-0," and "Rodneysaur, Dolphin!John, MerPatrick, WereRay, Hugh Dillon's Wings, Gerard's a Girl, and Pete Wentz as a Paisley Lamp: Fandom and the Transformation Trope," among others.[12]

Some con reports are linked from the muskratjamboree livejournal community here.[14] 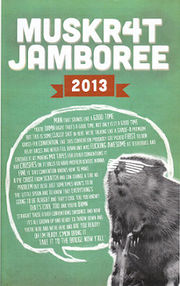 The 2013 convention was held March 22 and 23 in Cambridge, MA, at a new hotel -- which was substantially classier than where the con had been in previous years.

Panels included Slash Pictionary, "COME HERE WATSON I NEED YOU" (Sherlock Holmes), "Tumblr: Best Thing Ever or the Death Of Fandom As We Know It??," "Avenge ALL the things!" (Avengers), "The takeover the motherfucking break’s over: the end of the Fall Out Boy hiatus" (Fall Out Boy / bandom), "Fourth Wall Not Found: Fandom in a Social Media World," (meta), "I’m Obsessed With Knotting :(", and "For Reasons That DO Need Exploring In This Juncture: (Nearly) 20 Years of due South" (due South).[15]

Other events included a raffle (to support Doctors Without Borders), a vid show (see the vid show line-up),[16] and a dance party.

Coincidentally, My Chemical Romance broke up on the Friday night of this year's con, leading the con's substantial contingent of bandom fans to do a lot of hugging and crying.

Fan reaction to the 2013 con was overall positive. giddygeek wrote:

There's something truly special about sitting in a room with people who are this mix of bright and quick with a joke and deeply thoughtful and silly and earnest, and just talking out all these ideas about canon/fanon/fandom--it's brilliant. I love it. Can we do it again tomorrow?[17]

Having gone from the panel with the sex toys ("show and tell") to the crafts table ("arts and crafts") feels entertainingly like, you know, preschool, only NOT. :-)

...Anyway: it's been a lovely weekend, full of neat people and good conversations and sparkles and wine. [18]muskratjamboree: Important MJ Announcement, Archived version</ref> 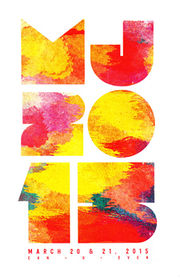 Eight years after the very first MJ, it's time to say goodbye. There are personal reasons of course - the time and effort that goes into throwing this con is enormous - and the shifting landscape of fandom is part of the reason, as well, but the larger truth is that it's become more and more difficult to throw the kind of con we want to throw, in a city as pricey as Boston. The economy has changed, the hotel industry has changed, and it's just not financially feasible any longer.[19]