From Fanlore
(Redirected from Vid show)
Jump to: navigation, search

A vidshow takes place during a convention, and is a series of vids shown in succession, most often for one or two hours. These may or may not be brand-new ("premiering") vids.

Other cons have shows that combine premiering and existing vids, such as Bascon, Revelcon, CON.TXT, Muskrat Jamboree, PacifiCon (aka Bitchin' Party) and Eastern Media Con.

Cons that are devoted specifically to vidding, such as Vividcon and Vidukon, also have vidshows based on themes, such as "Action", "Made in the UK", "Horror", or "Celebrating Fandom".

With the rise of the Internet, vidshows no longer are the primary method for vidders to display their work. In fact, the vast majority of online vidders have never even heard of a vid show. In the past, vidshows would consist of vids submitted by vidders eager to show off their creations. Now, most vidshows, with the exception of Vividcon's premiere vid show, are a combination of both submitted and solicited vids.[1] Vid shows that rely solely on submissions run the risk of attracting few vidders, even with widespread advertising.[2] With the world as your potential vidding audience, the idea of showcasing your fanvid to an audience of only a few hundred fans seems less compelling. Other vidders point out that the impact of a watching a fanvid live and in person is such a totally different and powerful experience that vidders who never submit to vid shows are missing out.

Extacly when vids began to be shown at fan run conventions is not clear.

Kandy Fong's slide shows were shown in 1975 at Equicon. The event was so popular that they were shown in rotation to accommodate the crowds. [3]

Diana Barbour and others report showing their Starsky & Hutch vids in their hotel rooms in 1980 at Zcon 2.

By 1984, Mediawest held its first "Film/Video Competition" - although exactly what material was being entered and judged is not clear.

In 1987, Mediawest held a video show that included vids such as "Fade to Black," "Jackie Edwards Videos: Music to the A-Team, Outlaws and The Equalizer," and music videos set to The Ghost and Mrs. Muir and Scarecrow and Mrs. King.

"The Song Tape contest will be held Friday night, from 8:30 - 11:30, in Kitty Hawk. Why? It holds more people. You must register your sonq tapes ahead of time by filling out one of the cards at Registration Ballots for the contest arc included in this Program Book, so don't forget to vote...turn in your ballots to Karen by 2 pm Saturday."[4]

For a couple of years in the late '90s, vidders, at Sandy Herrold's suggestion, experimented with vid feedback forms at Escapade and ZebraCon vidshows, asking people in the audience to scribble comments during, or directly after the show. The comments left on the forms were occasionally hilarious, but ultimately not very useful for the vidders ("good use of clips!", and the experiment was discontinued. They were also referred to as "comments forms" and "comment forms". For more information about the history of vid feedback forms go here. 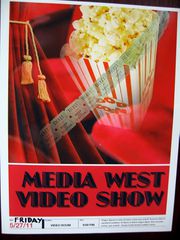 poster advertising for the 2011 MediaWest vid show by Spaced Ponies, a vidding group

It used to be more common for vidshows to include awards. ZebraCon, RevelCon, MediaWest, Friscon, VirguleCon and others gave out varying awards, often including, "best slash vid", "best humor vid," and "best vid by a new vidder". Escapade made a point, back in 1991, that they weren't going to give awards, and yet managed to have a strong vid show for years, which may have led to the decline in vid awards at vid shows. In fact, in 2010, the MediaWest vidshow lacked enough vid submissions for them to host a contest that year. However, after fanvidders protested, the vid contest resumed in 2011.

In the first three decades of vidding, vid shows were not designed - vidders would hand their vids on videotape and the tapes would be played one after another. Copying vids onto a single master vid show videotape would create a loss in video quality and given that many vids were made from second or third generation videotapes or off-air recordings, copying would render some vids unwatchable.

In the case of mono-fandom vidders this meant the vid show audience was treated to multiple vids in a row set to the same fandom - and in some cases using the same clips. Even worse, a vidder's musical preference could mean that a series of country western songs would be followed by Broadway show-tunes which would then be followed by yet again more country western. Some vid shows would attempt to sort the videotapes by previewing them and then re-arranging the tapes to provide as much separation and variety as possible. But in general there was little to no intelligent design to early vid shows. [5]

As vidders transitioned to digital vidding, vid show organizers took on the greater technological burdens of converting submitted video files into a single authored vid show DVD. With this greater responsibility came greater control and shortly after Vividcon began in 2002, the terms "curating" and "VJ" had begun to be used in connection with vid shows. VJs can now arrange vids in any order they please, varying both fandoms, music, as well as length of the vid show.

Only recently however has greater attention been paid to the mechanics of curating a DVD vid show. In 2012, some fans called for a Vividcon panel on the art of designing a vid show. And in April 2012, sdwolfpup offered extended notes and commentary on her experience in organizing the 2012 Pacificon vid show.[6]

[insert general examples of a curated vid show - the intro vid, selecting the opening vid, arranging vids before and right after intense vids, variations in how to arrange the middle of the show, matching or pairing vids, picking the vid to open the second half and the final vid.