CON.TXT is a multi-fandom slash-friendly con held biennially (in even-numbered years) in Silver Spring, Maryland. The con mascot is a purple duck, and ducks feature prominently in con activities, i.e., the Disco Duck and the Ducks Deluxe Arts & Crafts Show and Auction.

Some fans' thoughts about Con.txt

Playlists for the Vid Shows are here. 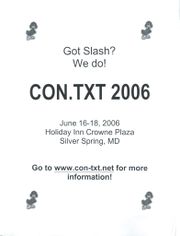 flyer for the 2006 convention

The first CON.TXT was held June 16–18, 2006; it featured two and a half days of tech, meta and fandom-specific panels, a Friday night party, a Saturday vid show, an art show, and a combined Dealers' Room and Con Suite (aka the ConSweet). Some highlights included the Fandom Spelling Bee, the 'Hot Topic' panels, and the Con Comm Favorites Vid Show (offline, archived here)..[4] The con was attended by 172 fans.[5] Programming is archived here..

In 2008 CON.TXT was held June 13–15 and was attended by 171 fans. Many of the same features from the last con were present, including the art show, where fans raised $1700 dollars for the con charity, Heifer International.[22] Some popular panels at the 2008 con included 'Creating Fandom as a Safe Space for Fen of Color', 'John Sheppard - Action Hero as Dork' and 'Writing Longer Stories.'[23] There was also a vid show. Playlist is here (offline, archived here). .[24]

Due to the coronovirus pandemic, the 2020 convention was held as a single-day virtual convention only July 25, 2020.[63]