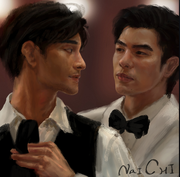 Fan Art of Kinnporsche the series.
"KinnPorsche The Series" is a 2022 Thai BL drama adapted from the online novel of the same name by [Daemi]. The second young master of a Mafia family, Kinn (played by Phakphum Romsaithong), is saved by Porsche (played by Nattawin Wattanagitiphat) while trying to escape a hostile gang. He is recruited to become the man's bodyguard, and eventually they become romantic partners. This Thai live action drama is a departure from the format of most previous BL dramas because of it's setting, explicitness, and high production values.

The series is fairly explicit with a rating on IQIYI of 18+. The explicitness of the scenes has turned off some BL fans who prefer tamer content. Some have also objected to the fact that the youngest actor, at 17, is unable to watch the show he is in.[3] There has also been discussion on how BL show ratings have dropped after the airing of the show thought to be because fans are less satisfied with run of the mill BL shows with poor acting and low production values. [4]

The novel that Kinnporsche was based on was very popular in Thailand, and many of the fans were following the production. When the original production company dropped the property during the Covid-19 pandemic, many fans feared that the show would not be produced. Be on Cloud was formed to complete the work, but not all actors continued with the project, notably gameplay. This led to some negative feedback.

Ratings were high during its production. There is excitement about an upcoming world tour to begin at Impact Arena in Bankok Thailand. "Do you feel like you were there from day one?" "We are so proud of you that you lift up the standard of Thai BL series" [7]

Kinnporsche has a large international fandom. Meta, gifs, and production news are found on many platforms: especially tumblr and twitter. All of the episodes have multiple watchthroughs on youtube. The production house is planning a Kinnporsche World Tour where the actors will go to other countries, although which countries is not certain yet.

A Vegas/Pete fanvid. Having escaped from Vegas' safe house. Pete is confused and upset at his conflicted feelings toward his captor.