From Fanlore
(Redirected from Spock (2009))
Jump to: navigation, search

The alternate timeline version of Spock is a lead character in the Star Trek (2009) film.

How Spock is presented in reboot fanworks differs from The Original Series, as in the alternate timeline canon in a short span of time he loses his mother Amanda Grayson, the planet he grew up on, his equanimity while commanding the Enterprise (in front of his father), and encounters the original timeline version of himself. Also, he has a girlfriend, Nyota Uhura, and doesn't much like Kirk.

Compared to his TOS counterpart, reboot Spock is more raw and spirited even before he goes through so much personal tragedy. In selected sections of her meta essay Star Trek reboot: initial thoughts and randomness,[1] seperis makes a compelling argument as to why this Spock differs so much personality-wise to his alternate self:

Spock and Kirk, interestingly, get on a parallel track they didn't have in Prime Universe; Spock and his temper have a stronger bonding experience due to (speculative) Vulcan xenophobia getting a kick in the ass at the appearance of Romulans thirty years too early and probably only a few years after his birth. Instead of just being a hybrid with a (lesser) human mother, he's a hybrid who is the son of a traitor to racial purity. That's two very, very different mindsets. It's kind of the difference between being British circa the nineteenth century with the noble savage nonsense and the Ku Klux Klan (alter deed in light of Vulcan's pacifism; the lynchings are all verbal). Spock was written off as not Vulcan enough--the entire scene in the Vulcan Science Academy was a long and torturous way for Vulcans to remind Spock he's not accepted for himself, but as a consolation prize, he can pretend in the Academy on the strength of being Sarek's--a Vulcan--son.

Spock may have some authority issues.

[...] There's also an indecent amount of parallelism: Spock's mother, Kirk's dad; Spock and Kirk's arguments; the change in upbringing that made Spock repress instead of controlling his emotions and anger expressed in violence while Kirk's upbringing had him searching out ways to express his anger in violence; the fact that both men go for the throat in a fight and do not pussyfoot around it.

[...] I think Spock brought up Kirk's father in a deliberate attempt to throw Kirk off enough a dispassionate argument and turn it from a judgment on Kirk's point that the test was in itself a cheat, since RL in infinite diversity cannot, by definition, be no-win, and turn it onto Kirk with a reputation for being a hothead.

(Actually, it was kind of brilliant a piece of manipulation if it hadn't been stopped short. There wasn't a logical reason at that point to bring up George Kirk at all in an argument regarding whether or not the simulation was a cheat; George Kirk had no bearing on whether or not something was wrong with the test. It was a direct hit on James Kirk to derail the argument away from "The test is a cheat and here is why" and to "James Kirk is a hothead and does shit like this; see how emotional he is? He can't be trusted. Get rid of him. And live long and prosper, fucker.")

(I tend toward thinking Spock has a scorched earth policy going on.)

[...] Whilst Pike enjoys Nero's hospitality, Spock goes to get his parents and the Vulcan elders, who are hanging out underground for reasons that I'm sure are important, and gets them back to the ship, sans his mother. Spock, who has had a lousy few days, loses his planet and his mother in one fell swoop. It sucks to be Spock. On his return, he orders them to go to Laurentian system for the rest of the fleet (why is the fleet there anyway?) and Kirk--disagrees.

[...] Kirk says argue the point, and Spock has him arrested. When Kirk starts fighting, he has him thrown off the ship.

(Like I said, this isn't reaction in moderation; this is scorched fucking earth. Mess with a test; get thrown out of the Academy. Rebel against ship authority, exile from the ship. For some reason, the perfectly serviceable brig wasn't quite enough. No. Put them in a pod and onto an ice planet.)

[...] It's interesting that Kirk manages to convey "Mindrape the Romulan" without ever mentioning how the hell he knew about mind melds and not actually ever referring to it. Spock, being--well, scorched earth Spock of lore, jumps all over that shit, and they split to carry out their plan of getting Pike and destroying Nero's ship.

[...] After returning to the ship, Kirk, in a stunning display of newfound mercy, offers to help Nero if he turns himself in. Spock, reprising his role as one who likes victory best when all the enemies are in their component parts, would rather skip to the component parts. And Nero refuses anyway, and there is destruction.

[...] In TOS, Spock was a restraining and cooling influence on the much more emotional Kirk. Their relationship was adversarial but not personally so; I find it unbelievably awesome that this is going to be the opposite. If Pike had searched the galaxy in this universe to find the one person who will do the same job without the same results, he could not have done better. This is two people who can compare and contrast their juvenile arrest records. This is two people who already have a habit of fighting personally and escalate each other to violence. Their intial reactions to being challenged by each other is already set in the habit of going for the throat first.

[...] Despite appearances, Uhura keeps Spock grounded in what makes him Vulcan, in a way; Kirk's what connects him to humanity's unrestrained passion. Spock makes Kirk fight for every inch, explain himself, wear himself out against something.

[...] I'm ridiculously in love with Spock. I mean, Kirk owned me from the start, but in TOS, Spock was awesome but he did not really--do it for me. Who knows why. Then this Spock is--wow. Just. I did not see that coming. Dear God. 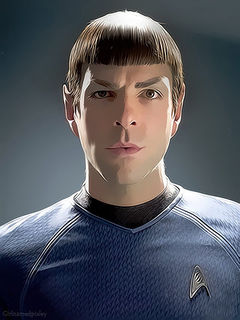