I’m not sure if you’ve already been asked about this, but what do you think of mcspirk? Was the ship around in the old days?

I don’t know exactly when McSpirk emerged, but I know it was early in slash history. Stories were circulating hand-to-hand in the 70s, before any slash was ever printed and openly distributed.

I don’t personally ship them as a trio, but I have zero problem with it being a beloved ship for many other fans.

I’m going to say more below, but this gets into nsfw material, so I’m putting it below the cut.

If you are at all familiar with slash from the print zine era, you will have heard of Gayle F, an absolute pillar of the early slash community with her art, her contributions to fannon (Spock’s double-ridged penis? Gayle came up with that), and her sophisticated writing.

Gayle has put some of her work online; here is a link to her McSpirk story, Between Friends. It’s justifiably famous for being the first published McSpirk in fandom history. (Although we did not use the modern mashup names for relationships back then: Spirk, McSpirk, etc.)

Between Friends is also famous because Gayle’s writing is bloody amazing. Although I don’t usually read trio stories, I have read Between Friends probably a dozen times over the years. It’s just that good.[1] 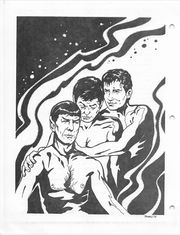 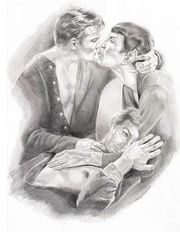