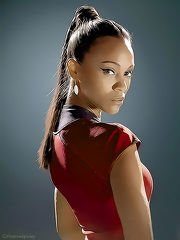 In Star Trek (2009), Uhura is a "human female who served as communications officer aboard the USS Enterprise under the command of Christopher Pike and then James T. Kirk in 2258."[1] She participates as a secondary but important character in the events of the movie, and has a romance with reboot Spock.

Uhura is of African heritage.

Origins of the Name

The name Uhura is based on the Swahili word uhuru, "freedom"[2]

Uhura's first name was never given in Star Trek: The Original Series.

The name "Nyota" was apparently first used in print by William Rostler in his book Star Trek II Biographies.[3] After that, it was used by many of the authors of the official tie-in novels, and eventually became fanon. Examples of it being used in the 1990s can be found in fanfiction posted to the Star Trek newsgroups.[4]

The 2009 movie used the name and it became canon.

Opinion on Uhura's characterisation in the 2009 film varies. While some fans feel that she was degraded to the status of a love interest[5] [6], others felt that the new film allowed her to shine [7]. As LJC wrote:

Sulu's awesome job moment was a kickass awesome sword fight, while Uhura's involved picking up on and translating a Klingon communication that set the entire plot in motion in her spare time, and then getting plucked from obscurity and assigned to the bridge because she speaks 3 dialects of Romulan when the Enterprise senior comm officer can't tell Romulan from Vulcan... Because Uhura's expertise is in the realm of "brainy" and not "brawny", mebbe it's not as visually cool. But for me, as a fangirl, I actually chalk being a kickass xenolinguist up there with samurai sword fight.[8]

liviapenn noted that in the original film, Kirk, Spock, and Bones were central; in the reboot she sees the addition of Uhura to that triad as a profound shift, balancing the OT3 into a new OT4.[9] Others felt that Uhura was given a more important role in the film than in ST:TOS (in Livia's post, just referenced, she also noted "she's actually getting a promotion, in terms of her role in the character-driven parts of the plot[.]")

At fanfiction.net in the Star Trek (2009) section Spock/Uhura's stories are fair in number [10], as the fans progressively felt compelled to further develop their relationship that is only hinted in the movie thus making Spock/Uhura the most popular het pair in the fandom and that is also canon in the franchise itself.

Many stories explore the possible beginnings of Spock and Uhura's romantic relationship, and take place pre-series, while the characters are still at Starfleet Academy. Writers dealing with this time period frequently make note of the difficulty of a teacher/student relationship, as well as the challenges of an inter-species romance. Stories set during the movie, or slightly afterwards are also popular. Writers expand upon Uhura's desire to comfort Spock after the destruction of his home world, and the loss of his mother.

In regards to femslash, she is usually paired up with her Orion roommate at Starfleet Academy, Gaila.

While some fans simply disliked Uhura and her role in the movie, other fans actively bashed her. Some anti-fans used racist or misogynist language when speaking about Uhura. For instance, some of Uhura's anti-fans make a play on her name with the word "whore."

Other people suggested that Uhura needed to be taken down a peg, a sentiment echoed in 2009 at the st_xi_kink meme: "So yeah, let's take this Uhura down from the pedestal. People claim that having her more assertive is good, but she's not assertive. She's a pushy bitch and everyone knows it, and if she wasn't a size zero ridiculously skinny and pretty, I think everyone would hate her." [11]

Racist comments (see spock_uhura for mod post on the topic. The original rant that inspired the mod post has been deleted, but excerpts can be found in this Unfunnybusiness post.[12] [13]

Not all race issues originate with Uhura's detractors. Even fans of the character can thoughtlessly stumble into painful territory. Offensive, race-based comments were enough of a concern that the moderator at the Spock/Uhura community felt it necessary to make an official post stating that: "if you have ANYTHING against Uhura (I'm going to talk specifically about Uhura and/or the actresses that play her - Nichelle Nichols and Zoe Saldana) then again, this is NOT your place. Racist comments = BAN." [14]

Further conflict arose in the community when a member began a discussion about Uhura's hair: "But there is one thing about Uhura's portrayal that is a little . . . off. [...] She has straight hair." [15]

The comments derailed in a manner familiar to anyone who has followed race-related discussions in fandom. [16] [17] The OP felt it necessary to leave the community after her post was ill-received, and set up an alternate community: uhuranspock4foc. [18]

The events surrounding that discussion led to a new co-mod, and a new policy at the community:

I have to say, when this community formed and grew to the size it is I was excited, surprised, and cautiously optimistic, because it is a rarity that a black woman is a central figure in a such a large pairing fandom.

I knew there would be missteps here, because race is always sticky subject, but I don't want to see the promise of interesting dialogue hushed because we don't want to talk about what makes us uncomfortable. We have too many intelligent people here for that.

Ideally, I'd like to see us tackle the challenging topics and often, without outright dismissal, but with the effort necessary it takes to listen, understand, and grow.

During IBARW 2009, rawles wrote an essay arguing that women of color and white women approach feminism from different places, and that Uhura's role in this film needs to be understood through the lens of the reality that black characters tend to be invisible or marginalized in pop culture. She wrote:

I have been a nerd my entire life... In the vast, vast majority of media relevant to my interests... it's not actually me that's being marginalized and constricted to the role of hot love interest or prize to be won or someone's mom or miscellaneous fridged loved one. On the contrary: I'm a black girl. I just don't exist...

This near total invisibility is perhaps the very first thing that I think needs to be understood in any feminist discourse about Uhura, but it seems to be the last thing most people talk about. As a result, they start off from a deeply flawed premise.

Uhura being single in TOS was not empowering.

...Nyota Uhura is a black girl and there is no angle from which her actually being allowed to have consensual sexuality, being desired, and being loved (in addition to having her job and intellect, no less) is a fundamental downgrade from what she had before.[20]

On November 29, 2013, user Jamie Jeans mentioned Nyota Uhura and the fandom's treatment of her when he published an editorial and videolog titled "Solidarity Is For White Fangirls Only"(minute 7:45) in which he criticizes the fandoms' double standards when it comes to female characters that are women of color. In the videolog, following the backlash against Uhura after the first movie and also its sequel, Star Trek Into Darkness, he argues that a lot of kirk/spock shippers tend to perceive Uhura as someone who 'gets in the way of their ship' and therefore they try to justify their dislike for the character and the Spock/Uhura romance hiding their bias behind the false and unreasonable pro feminist arguments in which, for the most part, they complain that Uhura is reduced to just "the girlfriend". In particular, he addresses the fact that there is double standards in fans calling Uhura unprofessional for arguing with Spock while they are in a mission, all the while they give a free pass to Kirk and other male characters for all their very unprofessional moments through the movie and in the original series.