Although she appears in only two scenes in the movie, many fans have embraced her[1] and given her a new life in fanfiction. Common subjects in Gaila-centric fanfiction include differences between Orion and human sexual mores, whether or not she was a slave girl, and whether or not she survived the destruction of the ships sent to Vulcan.

She is sometimes shipped with Uhura.

meta on Orions and sexual mores...? on female characters in Trek (see Misogyny in Fandom)... on depictions of slavery (green is the new black) 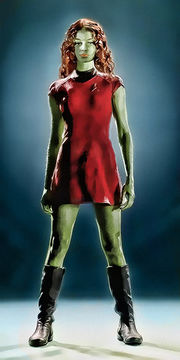