Are you looking for the pairing of Kirk/McCoy from the reboot franchise? See Kirk/McCoy (AOS)

Kirk/McCoy is the slash pairing of Star Trek characters James T. Kirk and Leonard McCoy in Star Trek: The Original Series fandom. It had a modest following in comparison with the iconic and ubiquitous Kirk/Spock.

Actress Grace Lee Whitney (Yeoman Janice Rand of Star Trek: The Original Series) described Leonard McCoy's role in Jim Kirk's life as that of "friend, personal bartender, confidante, counselor and priest."[1] As chief medical officer of the U.S.S. Enterprise, McCoy was one of the few people aboard able to relate to the captain as a friend and equal, and provided--in contrast with Spock's devoted but often coolly logical friendship--the human warmth, perspective, philosophy and humor Kirk needed in both his personal and professional life.

RPF was considered taboo during the heyday of TOS fandom. William Shatner/DeForest Kelley slash was rare, possibly to the point of nonexistence. 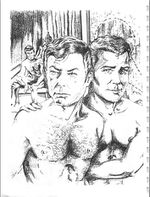 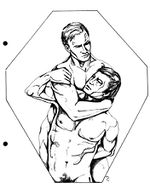 from Nome #9, for the story 180 Degrees, artist Marilyn Cole

Recurring themes, backstories and characterizations in canon-based Kirk/McCoy fic include:

AU fanfiction is common. Alternate universe depictions of Kirk/McCoy include:

A frequent permutation of the K/M relationship is its expansion to include Spock, uniting the three characters considered the 'holy trinity' or 'triumvirate' of TOS, as well as three of the most popular slash ships in the fandom (the others being Kirk/Spock and Spock/McCoy).