From Fanlore
(Redirected from Vulcan language)
Jump to: navigation, search

The Vulcan language is a fictional language in the Star Trek universe.

From the time of the beginning, Star Trek fans have been inspired to create their own Vulcan language, especially since few Vulcan words or names were ever spoken in the original series. Fans were eager for any information about Spock, his background and his world. Much of the very earliest fan fiction came about as fans tried to fill in these gaps.

In the second season, two episodes prominently featured Vulcans other than Spock, and viewers got some sense of his home life and culture. In the third season, an additional name was given, a philosophical concept, and a bit of Vulcan history.

The episode "Amok Time" led off the second season. Author Theodore Sturgeon and rewriters Stan Robertson, Joan Pierce and Peter Sloman included numerous details of Vulcan customs and words, even specifying what the characters should be wearing. Pierce and Sloman, not Sturgeon, invented most of the Vulcan words heard in the episode, as Sturgeon's Vulcan language was considered unrealistic and more likely to elicit laughter than awe. Numerous lengthy Vulcan speeches were cut. Sloman, apparently something of a conlanger, developed many unused words and even a syntax.

Plomik, pon farr, kah-if-farr, kal-if-fee, kroykah, lirpa and ahn woon are well known to all Star Trek fans, as are the names T'Pau, T'Pring and Stonn (who was originally called "Spor" until Bob Justman pointed out the Freudian slip).

According to Ruth Berman, in a review published in Babel 3 (October 1972), earlier versions of the script include Vulcan words and phrases that were cut. McCoy mentions that Spock's will to live kept him going through the dreaded ordeal, and Spock says "Ahn een kai larth", meaning "there can be no will to live when there is no reason to live." In the ceremony by which Vulcan children are joined, the reason it's "more than a betrothal" is that it involves a mind touch called marn tam. It's clear this is different from the mind meld, exchanging thoughts rather than blending two minds together, but still pretty intense. The male's closest friends who traditionally accompany him to the ceremony are his hut tao. Upon T'Pring's challenge, Spock becomes a lakh noy, challenged husband. Ahn woon originally meant "unarmed combat", rather than a weapon. Stonn said ong Spock lat enn troy kaw (in English he says Spock is away all the time and not attentive to T'Pring as he should be, so maybe this was a similar statement). As aired, all Stonn does is protest T'Pring's choice, and he does it in English.

Originally, T'Pau was to ask Spock if he wished to release Kirk from the challenge. Spock was to look at Kirk without recognition and shout "Kikki-nee klart!" Sloman changed this to klee-fah, "I refuse". The exchange was dropped in favor of Spock's quiet plea to T'Pau to forbid Jim's participation. However, James Blish worked from an earlier version of the script and included the klee-fah business. Sturgeon was less than thrilled by the many changes to his original script, but took two weeks and submitted a second draft with the suggested changes.

D.C. Fontana wrote this episode and gave Spock's father the name Sarek. The only other words of Vulcan in this story were sehlat and tal shaya. These words too are well known to fans.

Is There In Truth No Beauty?

This episode featured the IDIC symbol, worn as a pendant by Spock to honor Dr. Miranda Jones' accomplishments in establishing mental communication with the Medusans. IDIC stands for "Infinite Diversity in Infinite Combinations" and represents how our many differences can connect and combine to create meaning and beauty. Gene Roddenberry created the IDIC symbol to be used as merchandise, but his son Gene Jr. has said that he was quite sincere about the philosophy.

Here we learned the name Surak, and some of the history, and one word:

Kirk. We've each learned to be delighted with what we are. The Vulcans learned that centuries before we did.
Spock. It is basic to the Vulcan philosophy, sir. The combination of a number of things... to make existence worthwhile.
Lincoln. Yes. The philosophy of "Nome," meaning all. How did I know that? Just as I seem to know that on the planet surface you will meet one of the greatest living Vulcans in the history of your planet. My mind cannot recall his name, but I know he will be there.

Nome was picked up by Jacqueline Lichtenberg for Kraith and was an important part of Surak's Construct.

D.C. Fontana wrote this episode. ShiKahr was the planetary capitol, and fans also learned the names Selek, T'Pel and Sasak, relatives of Spock's family, the L'langan Mountains, and le-matya. From the novelization by Alan Dean Foster, fans picked up Sofek, Sepek and Stark, the three boys who teased Spock. The enormous sphere in the Vulcan sky stayed there in spite of Fontana's famous "NO MOON!" memo; Fontana told fans to think of it as a nearby planet; it was subsequently named T'Kuht by fanzine writer and artist Gordon Carleton in 1975.

Only a few Vulcan words were ever used in aired canon, most of them in the episode "Amok Time." Of course, fans quickly filled that void and created their own Vulcan languages, or at least a few expressions that could be dropped into daily speech. 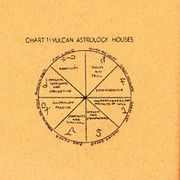 a fan speculates on Vulcan astrology, from Spockanalia #2, art by Juanita Coulson

The canon expressions "Peace and long life" and "Live long and prosper" were translated into a variety of Vulcan languages. The word "pastak" was said to mean "peace," and fans often signed off with that single word or with the phrase Pastak v'dora lashe, presumably "Peace and long life". Pastaklan vesla, supposedly meaning "peaceful thoughts", was another established expression. It was also the title of a fanzine. These words are not canon, and their origin is unknown, although Joan Verba suggests in Boldly Writing that these words came from a "joint effort among Michelle Malkin, Joyce Yasner, and Lee Smoire".[1]

The most extensive and influential Vulcan language developed by fans in the 1960s was that of linguist Dorothy Jones Heydt. It included roots, grammatical rules and syntax, and was used in her own stories and articles, then picked up by a number of other fan authors.[2] Jones proposed that "Vulcan is an isolating language; no word ever changes its form. Grammatical meaning (as opposed to lexical, or dictionary, meaning) is expressed by word order and the use of particles."

Ni var, the name of a Vulcan art form in which two aspects of a subject are compared and/or contrasted, was invented by Heydt and picked up, along with numerous other words from her Vulcan language, by the general fan community. Even Jacqueline Lichtenberg, who had begun to create a Vulcan language for Kraith, borrowed ni var. The expression was used as the published title of a fan novella by Claire Gabriel, The Thousandth Man, which subsequently appeared (in substantially edited form) in the anthology Star Trek: The New Voyages. The story was consistent with the original meaning of ni var in that Spock was subjected to an experiment which split him into two persons, one biologically Vulcan, the other Terran. The story enjoyed immense popularity among fans as well as with Leonard Nimoy himself. Nimoy contributed an introduction to the shortened version of the story in New Voyages, in which he said (mistakenly) that ni var was "the duality of things: two who are one, two diversities that are a unity, two halves that come together to make a whole". The Vulcan ship Ni'Var, which appeared in an episode of Enterprise, was named after the story; the original association with Heydt's seminal conlang had been forgotten and the meaning had been changed. Today, ni var is associated with slash pairings. [3]

A gryphon-like statue in Spock's quarters, named "Shariel" by Dorothy Fontana and identified by her as the Vulcan god of death. He holds a firepot.

Spock's Xtmprsqzntwlfb family name was conceived by Dorothy Fontana as canon continuity and accepted by fans who used it in various stories (Dorothy Jones Heydt even created an explanation for Vulcan names of this type). Fontana also proposed "Shariel", initially as the name of Sarek's father (who was also an ambassador) in the original draft script of "Journey to Babel", but also used as the name of the Vulcan god of death, seen in Spock's quarters in Amok Time and a few other episodes. D.C. Fontana also established Grayson for Amanda's maiden name, first in the original script for "Journey to Babel" and later in the animated episode "Yesteryear". Fans consistently used the name after that, linking Amanda with Sherlock Holmes and occasionally with Dick Grayson, the original Robin in Batman.

For the Kraith universe, Jacqueline Lichtenberg proposed one Vulcan language with many different styles or forms. High, Middle and Low Vulcan were the spoken forms, applied in degrees of formality or ceremony similar to the High and Low Martian of Leigh Brackett, or historical High, Middle and Low German. High Vulcan is "ultra-precise" and its written form is a set of complex graphics which can resemble "a hybrid of a chemical phase diagram, a cubist's nightmare, a Hebrew paradigm, and an oriental filigree expert's idea of a decorative hiding place for a code." When things get too complex, the writing has to be broken up into numbered sections like a road atlas, rendered as sculpture ("High Vulcan Modular")or expressed in dance (tokiel). [4] [5]

Lichtenberg's Vulcan language was essentially a philosophical conlang similar to clergyman John Wilkins', in which each sound was designated into a category.[6]

Low, Middle and High Vulcan are characterized by level of exactitude and contain an increasing number of minutely differentiated phonemes, such that High Vulcan is almost impossible for a Terran to learn because "the phonemic differentiations are often too fine to hear and the corresponding semantic differentiations are often impossible to comprehend." For example, the word t'seluret, loosely translated "art" is literally "the creation of beauty from that which has been created" and it is broken down into:

Lichtenberg also picked up on the fact that in "Journey to Babel", written by D.C. Fontana, Sarek had refused Amanda's suggestion that he say "thank you" to Spock for saving his life, on the grounds that what Spock did was logical and "one does not thank logic". From this, Lichtenberg decided that Vulcans don't say "thank you" (although Spock says "thank you" many times in the show; he knows that's a human courtesy). This was picked up by other fan writers. It was recalled in the animated episode "Yesteryear", also written by D.C. Fontana; when young Spock thanks his older self for his help, the response is "It was my duty". Young Spock then points out "Mother says you should always say 'thank you'", again indicating that Vulcans don't, and older Spock attributes this to Amanda's graciousness. Claire Gabriel used the phrase "I accept your gift of self".

Some of the concepts Jacqueline Lichtenberg invented for Kraith were adopted by fans outside the Kraith universe. For example, Sarek's father was called Suvil, and that was generally accepted until The Search For Spock revealed that the man's name was Skon, and further, that his father was called Solkar. 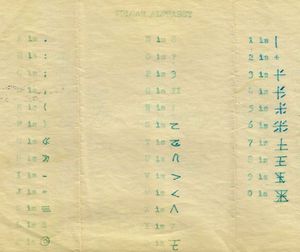 From the late 1960s: Candy J. Kolter's simplified Vulcan alphabet for use by Earth people. 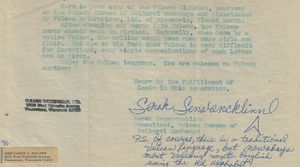 Serak Senarencklinn's description of the history and usage of the Vulcan alphabet conceived by Candy J. Koulter in about 1968-69. 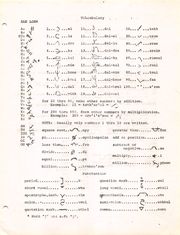 1969: first page of a LONG fanwork by Ev Turner, printed in Menagerie.

Many fans invented Vulcan writing systems. In about 1968 or '69, Candy J. Kolter of Wauwatosa, Wisconsin founded Vulcan Enterprises and offered several inexpensive items, including a Vulcan alphabet for $1, through a number of fanzines.

Some print fanworks that focus on the Vulcan language: