The Vorpal Sword is a gen Science Fiction anthology with some Star Trek content. It was edited by Michelle Malkin & Deborah Kogan. It was "available for 50 cents, contributions, or a LoC"

For a list of similar zines of this era, see List of Star Trek TOS Zines Published While the Show Was Still On the Air. 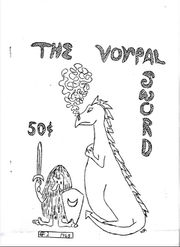 The Vorpal Sword 1 was published in 1968 and contains 36 pages. The artwork is by Deborah Kogan.

Hello! It is your local friendly Editors again with another issue of the Vorpal Sword. We don't give up easily. In case you haven't met us before, may we introduce ourselves as two young femme-fans of twenty-one years apiece - Michelle Malkin, who after college wishes to work with a publishing house, and Deborah Kogan, a psychology major going onto graduate work soon.

You are holding the new and natty improved copy of the Sword, for it is now in a more compact, standard format, by popular demand, We are as varied as over in material, and by request of many Star Trek fans, we have some material on that too.

Since editors are famous for putting their feet in their mouths by writing editorials, we feel we should fullfill your expectations by writing one. The topic is the proposed North American Science Fiction Convention, to be held in those years when the WorldCons are to be held out of the country. This would be held at a different time of year than the standard WorldCons, to enable notables to attend, and to enable those who have the money and the volition to travel to the WorldCon, to do so. This having an alternative con here in the country every four years, when the WorldCon moves out of the country is good in that it permits the many poverty-pocket fans (like us) who perhaps can't afford to go to Europe to enjoy a con where they would normally have to do without. A committee should be formed that would care for bids every four years, being inactive in the intervening years. We realize that having two big cons in one year would drain the pocket-books of notables who would feel obliged to show at both the WorldCon and this one, but we must take into account the vast majority of fans with limited means who would not like to be cheated out of a con every four years. This subject should be brought up at the StLouisCon. Your support for this idea would be appreciated.

...very good for a first issue. I do have some suggestions, though. First, of all, the size - it's too big to fit in where I keep my other Zines and the same probably goes for most other people. You don't get that much more on the page, and it would be a lot cheaper to single space all the way through if that's what you want (unless you are getting this paper for free, of course). Why didn't you use the heavy paper for the cover instead of page 5-6? I hope the repro will improve with future issues. I enjoyed Finders Keepers, but Thespis Fens really upset me because I didn't realize that it was a serial until I got to the end and there wasn't any. Personally, I would rather see fewer things in a zine, but no serials, if the editor has a long story, but of course that is only my personal opinion. The Match-a-Fan form would never work -- it may just be just me, but I don't think I have ever seen a multiple choice form that didn't have at least one question that I couldn't answer unless they all included "other" and allowed more than one choice per question. [1]

This is my first thoughts upon looking casually through VORPAL. You seem to have a real problem with your repro; a number of pages are quite illegible. Usually it seems to be a combination of half-the-printing-of-each-word-is-missing and very bad showthrough. [P]robably using a better grade of mimeo paper (say, 20 lb.) would take care of a lot of this. It doesn't have to be too expensive - usually the 90c-$l.50 kind is better than the higher cost. Also, the right paper will absorb ink fast, thus eliminating many of your offset problems. Since you don't seem to be using the full length, why use 11x1.4' paper? It is rather large for comfortable handling. Also, more costly.

The art is fairly good; several of the pictures are quite clever. I liked the One Ring in the cereal box. Harriett's article was interesting- it even sounded like her. I enjoyed the take-off on the Ancient Mariener (wish my spelling was a bit more with it) and the triple poem by Malkin, Also found Ron's discussion on the multi-generational spaceship interesting, Whoever did that match-a-fan form thing certainly has Heinlein-on-the-brain.,, I found Deborah's poem interesting but confusing - on a different level with the others. It will bear re-reading. Would be nice if you left a larger upper margin on your pages. However, your typos, spelling, and grammatical errors were very few, which makes for pleasant reading, and is most unusual in first issues. I think if you can't manage to number your pages as you do your stencils, you might look into acquiring stencil numbers,,, uh, I mean like shading plates, the kind to letter onto a stencil, so they111 look neat and tidy. What is the Kluver Bucy-Syndrome? (Ed. note- it is a hypersexuality syndrome caused by a certain lesion in the limbic system, in the brain) Can I have missed one? Active avoidance - only one I know is an avoid - your wife's-mother thing, in certain primitive cultures. Now that's an odd thing to have trouble with. (Ed. note - active avoidance is a type of learned behavior to a noxious stimuli

Not bad for a firstish. Try to get slight more varied material, and work on your repro. Thanks for giving me a copy, deborah.). [2] 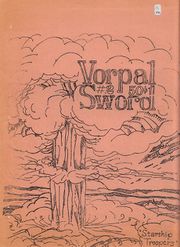 [excerpt from "More Facts on Fandom"]: "... for those of you who may have a yen to meet a B.N.F., but are not sure how to go about it, I'll try to to make it a little easier for you to approach the fan of your choice. If you are not sure the man is the one whom you wish to meet, you ask, "Excuse me, sir, but are you Mr. Isaac Asimov?"... Isaac Asimov is a great one for verbal jokes. He can tell you his someone else with a poker face, and convince you of it if he chooses. Lester del Rey is a fatalist and believes every pain and ache in the world has great merit to it. Randall Garrett is a lady's man, just in case you are a nice looking chick, and so is Harlan. [They and many others] are regular fans, but still should be treated with the respect due their station as B.N.F.

[excerpt from "The Negro and Science Fiction]:

Kirk, Spock, Uhura, and Nurse Chapel are under the control of a race of psychokenetics, Kirk and Lt. Uhura have been paired by these people and are forced to kiss. Moments later they separate, and Captain Kirk turns his face to the camera. His lips are covered with soot.

Yes, soot. For Uhura is not being played by Nichelle Nichols, but by a white woman in blackface. Not the way you remember it, you say? A nightmare? It cannot be! And, you would be right, at least on TV, as Gene Roddenberry had noting to do with this casting; it was the type done by the Fans in progressive Berkeley, California, and this seems to be the way they do things out there.

When I saw this I was surprised. When the surprise wore off, I was just bugged. Was it possible, in all of progressive, liberal fandom, to find one black woman to play Lt. Uhura? Sure, it's type casting, but this was akin to "Birth Of A Nation," the pro-KKK film by Grifith, where all the Negro parts were played by whites in blackface.

I said as much to the people who were near near me. But, then I looked around - not a black face to be seen. At the Con, later, the only Negro I can remember is the famous Sargent-at-Arms from New York, Elliot Shorter. Basically, however, the Con was white.

Then, I looked back on the other Cons I've attended and realized they, too, were white. Even my own home club, the Philadelphia Science Fiction Society, has only two Negro members. It seems slightly weird that a show which is often put down as being retarded in the use of science fictional devices is actually far ahead in its recognition of the Negro's part in society. They were able to get up the guts to be the second or third show on TV with a Negro playing a continuous, significant role. It seems that written SF is the retarded religion. As to why, that is the goal of this essay. 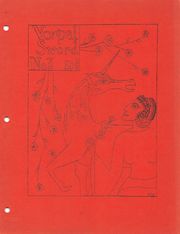