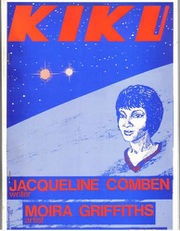 Kiku is a het Star Trek: TOS Kirk/Uhura 60-page novel by Jacqueline Comben. It has art by Moira Griffiths.

The first printing was 250 copies.

From the 1986 flyer "Sometimes Uhura feels as if she has to say the words "Hailing Frequencies open" one more time, she'll scream. During one such period the opportunity arises to lead a Survey party on a newly discovered planet -- and she gratefully seizes it with both hands. Of course, the trouble with such an opportunity is that it may provide just a little more excitement than bargained for."

A delight for Uhura fans, in which a maternal side of the efficient Communications Officer is shown. Lost in a jungle, Uhura is rescued by a charming local girl, equally stranded, from her home. The girl, Kiku, shows her new friend survival techniques, receiving new ideas on play and joy in return. When rescue comes, it is not altogether welcome to either. [1]