Baselines is a gen multimedia anthology fanzine published by Starbase Kansas City. It ran for 5 issues. It is a clubzine. 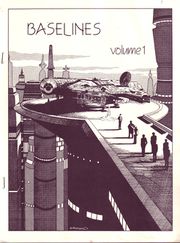 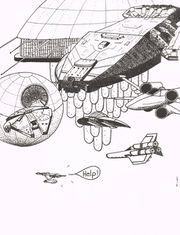 back cover, of issue #1, Cathy Strand

Baselines 1 was published in May 1981 and contains 96 pages. 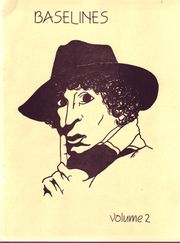 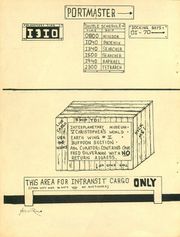 Baselines 3 was published in March 1983 and contains 94 pages. The front cover by Sat Nam Kaur. 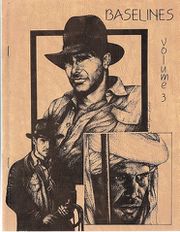 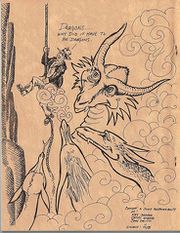 back cover of issue #3 by Jann Frank
The editorial:

Cathy Strand tried to get away, but we won't lot her retire completely; she will remain as Consulting Editor and occasional writer/artist, when the publisher can coerce, cajole, or blackmail.

Mea culpa. mea culpa! The back cover of issue #2 was rendered by Jan Northern and somebody forgot to include this credit. I have been waiting a year to apologise. Okay, Jan?

When trying to do the layout for this issue, we discovered that there were way too many entries to fit the number of pages decided upon, therefore, issue #3 has been split up and issue #4 will be published in the summer of 1983 instead of waiting until next spring. When BASELINES was first published two years ago, we announced an 'intermittent' publishing schedule, so we are now going to be 'intermittent'.

BASELINES #4 will feature an alien portfolio [and Include stories advertised for issue #3 that you don't find in this issue). Contributions are now being solicited. Send to Kay Johnson at the address below. Please enclose return postage. PG rating please...BASELINES is sold to kids. Thanks.

The first story is one by Melva Gifford and it is reprinted from Darklord #1. It is entitled, 'The Meeting,' and it is a cute story about the meeting between Yoda and Miss Piggy. The second story is about how Han Solo won the Millenium Falcon from Lando Calrissian and is called 'Forgotten What?' The third story is one I especially liked. it is a fantasy called 'The Watcher' and is about a young woman and her grandfather who are manning a lighthouse on the English Coast during World War II. During her walks on the shore, the young woman often sees a mysterious 'watcher' up on one of the high hills. She wonders who the person is. Her question is answered when a group of Germans lands on the coast. The longest story is a Star Trek story called 'Rayna.' It is about Khan and Marla McGiver's daughter and her decision to join Star Fleet. Other stories include one about a young woman's efforts to save a dragon from a dragonslayer, and one is a short Dr. Who tale. Most of the stories are well-written and readable. There were few typos. Most of the stories were lighthearted ones. The artwork was appropriate for the stories. The cover of Indiana Jones by Sat Nam Kaur is very good, and I thought the cartoon by Jann Frank on the back cover was cute. Most readers will probably find this zine enjoyable reading.[1] 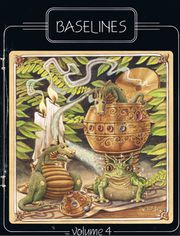 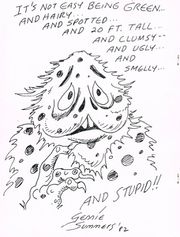 back cover of issue #4, Gennie Summers

The editorial is the place for the zine editor's usual "This issue is late because..." statement, isn't it? So here it is:

"This issue is late because..." In November, 1983 everything was progressing very nicely on the zine, but then Nicholas Meyer blew up Kansas City in THE DAY AFTER, and that sorta interferred with our publishing plans. It took us a little while to gather and sort all the ashes, call the Enterprise for emergency help, and send Kansas City (and the zine...and the printer) through the transporter for reassembly pre-THE DAY AFTER. Well, it worked! You have your zine, don't you?

BASELINES #5 is now accepting submissions. Deadline will be the end of September. Please send to the address listed below and include return postage. Anything in the multi-media genre will be considered, although the rating is PG...BASELINES is sold to kids. Thanks.

This zine has professional, glossy, thick covers that surpass the quality of big-budgeted nationally distributed magazines. Randal Spangler's brightly colored front cover of dragons, a frog, and a huge gold goblet is a stunning, intricate fantasy piece. When I got this zine in the mail and saw the cover, I thought someone has sent me a pro art portfolio containing the likes of Hildebrandt, Pini, Boris or Freas, not an amateur media zine. Except for a few typos, the layout, reproduction, typeface and art are all quality material. The contents are an uneven mixture of excellent to mediocre work but the majority is quite readable and effective. Of the poetry, the least memorable are 'Foundations Felled" by Sherri Thurmond (a strongly lyrical, well-metered piece... "Honor" by Patt Geletri (an effective, economical, taut piece with a powerfully bitter message about the Prime Directive), "Unicorn" by Kristy Merrill (a beautifully expressive tribute to the mythical beast) and two very short humorous pieces written -- I assume -- no writing credit is given -- and drawn by Jann Frank called "Introducing Citizens of the Galaxy" (sort of "informational poem" wherein a couple of nasty looking, intelligent aliens are introduced to us, tongue-firmly planted in cheek); As for the rest, Dii Jii" by Harriett Stallings is easily the best offering and quite honestly one of the best examples of SF -- the is speculative or sociological fiction -- I've seen in any zine in a long time. Set in the ST universe, it concerns a new alien crewmember brought aboard the scoutship Ariel. There, he encounters rejection, disgust, and bigotry. Written in a finely concise, incisive style, the story is extremely sensitive and perceptive. I hope Stallings does more like this. I do wish, however, that it had been expanded more, to include scenes showing us Dii Jii's gradual, partial acceptance along the crew, and, in particular, his growing friendship with his second roommate, Poul. Aside from that, the story is quite successful, and the ending is a stunning surprise. "My Kingdom For A Cupcake", by Kay Johnson and Catherine Strand (reprinted from R & R XVI) is an unevenly humorous story about a planet whose inhabitants are grossly obese because that is how they measure wealth. The Enterprise is assigned there with a Federation ambassador in tow, and finds that the king is an exact duplicate of James Kirk, except for the immense weight. (No, not even our chubby captain is this huge!) There are a few funny bits here, like McCoy's barbs at Kirk and Sulu's beggaring disguise which gets him an abundance of sympathy from the portly natives, but the plot is ancient -- the king is kidnapped by his power hungry brother just before the coronation and guess - who steps in to pose as the monarch while the search is on-- and the constant giggles and wisecracks about obesity lakes this just one long fat joke. A shorter length woulld have made it more effectively funny. Jann Frank's cartoons to this, though, are genuinely whimsical. "Just a Grain of Sand" by Sherri Thurmond is the longest piece, a SW story about Leia refreshingly as the main character. Set before ANH, it spans her career as a senator and involves Palpatine's overthrow of the Republican Senate and his imposition of the Imperial version. The government is here referred to as both a Republic and the Empire (before Palpatine's action) and the assumption seems to be that the Empire/Emperor and the Rebellion all came about within Leia's lifetime. Thurmond's depiction of biases toward Leia because she is female seems to run counter to the impression given in the film that Leia being a woman in power was of no special consequence, tho I understand that's a debatable presumption. The writing and dialogue are a bit stilted and occasionally clumsy but, generally, Thurmond keeps you reading and involved in Leia's rise as a political savior of poor planets trying to get themselves back on the prosperous galactic trade route. The art by Marilyn Morey fully illustrates the story with depth and skill, tho her illos of Leia herself never really approximate the senator's actual face. "The Night of the Displaced or James T. (West) is James T. (Kirk)" by Maureen Holton is a fun cross-universe story with some hilarious laments, like Spock's reaction to Artie's reaction to the Vulcan and an easy, natural rapport between the two Jims. Overall, though, it doesn't quite succeed, especially when West poses as the absent Kirk on the bridge to confront a Klingon captain. Although a great idea in itself, the execution is too quick and unconvincing. No self-respecting Klingon captain would swallow West's weak snow job. Then, too, Artie is a bit dense in this story, constantly quaking with fright over his surroundings. I love cross-universe stories but they usually wind up rather skewed and incomplete. The illos by Lucy Synk are quite skillful, particularly the composit intro illo done in the style of THE WILD, WILD WEST's illustrations that were shown before each commercial break. Other prose pIeces here in are short-shorts or vignettes like "Close Encounters of the Vorst Kind" by J.M. Joyce (an insane piece pitting George Lucas, Steven Spielberg and Harrison Ford against the Visitors frail 'V", the aliens from CESK and SW, etc.); Sunset For a Warrior" by Kirsty Merrill (a well-written BG piece with Starbuck as an old man stranded on a planet -- don't worry, the ending is quite joyous and positive) and "Beyond the Door" by Carol-Mel Albassador is a touching interlude between Saavik and David -- NOT romantic -- Set just before the scene when David enters Kirk's quarters to comfort him, and in turn be comforted, in TWOK). Gennie Summers has more of her renowned crazy cartoons (my favorite being a series with bulky aliens struggling with Starfleet uniforms) and a lovely alien portfolio by various talented artists. Recommended.[2] 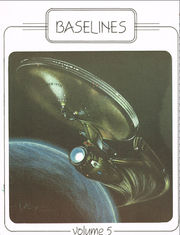 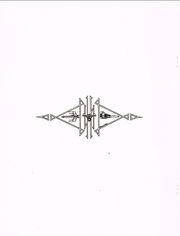