Side by Side (Star Trek: TOS zine)

Side by Side was a slash K/S e-zine that ran to 23 issues and six special editions between 2001 and 2007, hosted at Lady Kardasi's Domain.

At some point between 2003 and 2005, the site became accessible exclusively through a password. To achieve the same, some rules should be followed, including signing up for a Yahoo!Group.[1]

In May 2019, it was announced that Side by Side would be moving to the Archive of Our Own as an Open Doors Project[2]. The import was completed in November 2020[3]. 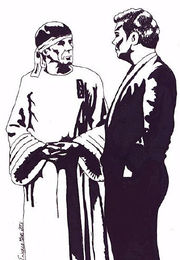 Side by Side is an online 'zine which works under the assumption that the Star Trek characters Captain James T. Kirk and his first officer Commander Spock are lovers...or destined to be. The 'zine contains adult material called slash - as in sexual relations described in word - and/or art - between two grown men.[4]

In 2004, in an interview for Lyrastar -- available at Lady Kardasi's Domain -- Kira said:

SBS is pretty personal to me. It was fun when it started, and it still is. Sometimes it's a struggle getting enough submissions, but it's always such a pleasure putting it online, knowing there are lots of people around who enjoy reading the stories and viewing the art. But if one day I feel that I don't want to keep running it anymore, I think I could probably pass it on to someone else who shares my love for the boys. I do enjoy running SBS though, so I don't see that happening any time soon - unless real life gets way too demanding to keep it up.[5]

From an article by Lyrastar in the printzine Legacy #2, published in July 2007:

With the success of the Kirk/Spock Online Fest (KSOF) in 2000, it became apparent that as well as readers, the number of K/S writers now online had reached some critical mass that a K/S only fiction library could be viable and utile. In July 2001 Kira—the instigator of the KSOF—Web published what she called a Kirk/Spock zine, Side by Side, to mixed reactions. Free of the text-only restrictions of the newsgroups, it could contain art! For some it was exactly what they wanted, gripping Kirk/Spock drama, illustrated, collected, attractively formatted in a stable location. And free!

For others just calling it a zine—when a zine should be a precious thing to hold in one’s hand and treasure—was absurd. Adding to this, while there was a stated requirement for stories to be beta- read—edited by an outside person—it was not enforced. Once submitted, stories were not edited by Side by Side, and freed from the financial and physical restraints of paper publishing, pretty much anything fitting the Kirk/Spock relationship content criteria was accepted.

Kira says, “My enthusiasm for K/S was the enthusiasm of a newbie (relatively speaking anyway when it comes to the print zine world) and I didn’t care. I just thought, ‘Hey, I love K/S; I wanna make a zine/fest whatever.’ I walked in where angels might have feared to tread. It was slow going at first though to get people to submit.

“I didn’t talk much with other zine people before starting it. Honestly, the thought didn’t really occur to me. Jenna and Dot Laoang were the only ones. They were both very supportive; Dot was the one who came up with the title.

“I did it because I felt that zines were so expensive, especially for us non-Americans due to postage fees, since most zines are produced there—or were back then anyway—that I wanted an alternative to it. Regularly published K/S would be nice.

“Later, I’ve understood that it might have been a bit ballsy to do what I did, but that’s okay.”

Apparently other people thought so too. After six years, Side by Side is over issue number 20, including several more rounds of a Kirk/Spock Festival.[6] 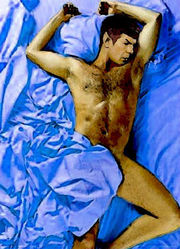 See the subpages for details about individual issues, including artwork examples and story feedback:

Subpages for Side by Side (Star Trek: TOS zine):

An administrative oversight meant the domain name for Lady Kardasi's Domain was not re-registered and was sold by the domain registration company to a third party,[7] rendering the site unavailable. Initially it was thought that the site could be hosted elsewhere, but this never eventuated, and although some parts of the e-zine can still be accessed via SBS Main Page, Archived version, more and more is being lost over time. With the 2020 completion of Open Doors' import of Side by Side into the AO3 all of the stories were recovered and imported, but unfortunately of the 250 or so artworks, 32 remain unrecovered.

From the group description on Yahoo:

Side by Side is a companion list to the online e-zine by the same name. Once quarterly (roughly, depending on if there are Special Editions, related to KSOF f.i) the stories published in the e-zine will be posted on this emailinglist. Discussion about the stories is allowed, and feedback to the authors is strongly encouraged.

OFF TOPIC posts are permitted if you mark them as such. You may not post stories to the list though. Only fiction submitted to the Side By Side e-zine will be published here, and each story will be posted by list-mom (or a list-mom-helper) upon publication.[8]

Membership of the list was restricted to those 18 years and over - applying for membership was deemed certification - and anti-slash sentiment was not permitted.

As the new list grew in popularity, the number of Side by Side stories posted to ASCEM - a key distribution point for K/S fiction online - declined, and SBS-ezine became the central point for feedback and discussion.

In 2002, with issue #6, a new section of Side by Side called the Hall of Fame was introduced with the following announcement:

The HALL OF FAME is a new segment for the Side By Side e-zine. Here I will present some of the best Kirk/Spock stories that are available on the Internet, and perhaps old printed stories as well if some author someday will allow me to do so.[9]

There were twelve Hall of Fame stories in total, the last one included in issue #20. Although many printed stories did end up being published in Side by Side, particularly in the later editions of the e-zine, they were largely presented in the regular stories section rather than as Hall of Fame inclusions.

From a February issue of the letterzine The K/S Press in which the editor asks for submissions:

Have you ever been published online? Would you like to be, but have been to busy, or not knowledgeable enough to create your own website? Well, this is the place to do it. 'Side By Side' is now accepting old print zine stories, from zines that have either gone out of print, or where the exclusivity period is up. Do you have an old story collecting dust instead of being read by other K/S-ers, this is the place to send it... As of now, I only accept electronic submissions. Stories are to be exclusive to 'Side by Side' online for a period of TWO months. After that you can publish your stories anywhere else online that you see fit.

Submission deadlines and newly published issues of Side by Side were advertised to the broader K/S community through a number of Yahoo groups, including ASCEM, Kirk-and-Spock and SBS-ezine. The editors' Livejournal accounts were also used to spread the word.

This issue, which is #17 of our "regular" Side By Side, contains stories by many well known online authors. They include Farfalla, Hypatia Kosh, Vanasati and Abraxisdragon. There are also a couple of wonderful efforts from veteran names in the K/S zine fandom such as Catalenamara and Jenna Hilary Sinclair. We also have submissions from relative newcomers (at least to SBS) like titC, Dale, SherryK and Starshadow.

This issue includes a new feature as well. That feature is two interviews with well known online authors/webmistresses Farfalla the Butterfly-Kitten and kira-nerys, both conducted by Lyrastarwatcher. Future issues will contain interviews with other interesting and involved K/S people.

The Hall of Fame contains an old zine story by Catalenamara called "A Private Obsession" which is a slightly different, but intriguing take on Kirk's and Spock's relationship as viewed by an outsider.

Side by Side Anthem

Oh, we ain't got a barrel of credits,
And maybe we need a few edits,
But we'll travel the sky Happy as pi,
Side by side!

Through all kinds of space storms,
Maybe the stars will fall,
But as long as we're together,
It doesn't matter at all.

When they've all had their quarrels and parted,
We'll be the same as we started,
Just traveling along,
Singing a song, Side by side!