From Fanlore
(Redirected from Starshadow)
Jump to: navigation, search

You may be looking for the multimedia zine Shadowstar or the Blake's 7 zine Shadow Star.

From a 1980 ad: "For people suffering from an acute lack of Star Trek fan fiction."

Star Shadows 1 was published in August 1978 and contains 147 pages. 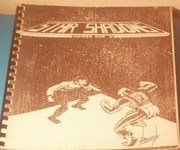 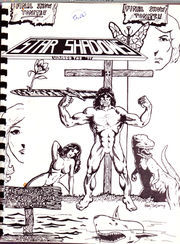 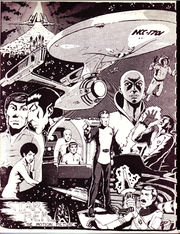 back front cover of issue #2

Star Shadows 2 was published in November 1979 and contains 124 pages.

Star Shadows is the kind of zine which normally appeals to me. There is, at first glance, a nice balance: Star Trek fiction of varying lengths, a con review, celebrity interviews, poetry, and a cartoon feature. The front cover art, opening story, and Chekov cartoon story-line were all by Rob Helmerichs, who seems to delight in obscurity. Judging from the vicious, one-sided attack on religion in "The Dinosaur is Crusified", it's just as well. Susan Papas could hardly fail to please since she hit me at my weakest points: celebrities, conventions, Scotty and Sulu. I'm not much of a fan of free verse, but any poem which compares Sulu to a kaleidoscope can't be all bad. For the most part, though, Star Shadows is devoted to Carol Maschke's fiction which is a shame since Carol is also the editor. This is a mistake. A writer needs an objective hand to sweep away the excess verbalization. "The Memory Machine; Part III" needed to be cut by a least fifteen pages. Every scene in which the characters are laughing (or smirking or chuckling or grinning or celebrating) should be cut. The reader is forced to ask himself, "If all the characters are having such a good time, why am I so bored?" The humor centers around falling towels, kissing contests, and sophomoric allusions to sex. There is not one witty or clever line to spark all the redundant hilarity. The months of courting should be distilled down to a vivid, poignant scene or two in which the couple realize the depth of their feeling for each other. The final third of the story is quite good. Just hang in there. I'd love to have a poster of Greg Nesbitt's back cover. It's a collage of scenes from STTMP. Absolutely first rate!. [1]

Star Shadows 3 was published in January 1982 and has 119 pages. It includes some Dark Shadows material. 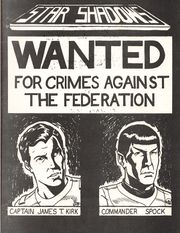 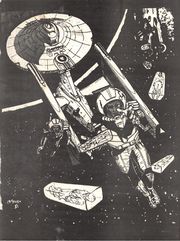 back cover of issue #3, Gary Nesbitt

This issue is dedicated to all of those who believe in the Enterprise and the Columbia, America's space shuttles., and to the people who helped her to fly. It's nice to see that some things still seem hopeful.

This issue is also dedicated to DeForest Kelley and Walter Koenig. I took advantage of an opportunity to meet them, and say a few words to them and found much to my delight that they are indeed real people who sincerely care for their fans. It was a genuine pleasure to meet each of them, and if I'm fortunate, I'll have the opportunity again someday.

As a side note to this, it should be mentioned that when we left Hugo's there were very few people left there except the ones who worked there, and Walter. But, as none of us had eaten that day, hunger overrode all else and we went to get something to eat. By the time Skip and I (she's my roommate) got back to the dorm at Hamline University, after we had successfully dropped everyone off, it was a good two hours later. A friend of ours down the hall saw us come in and told us that our phone had been ringing pretty consistently for the last half hour or so. Erm. Curious. Well, sure enough, the persistent caller called back again in another couple of minutes, I answered the phone, and was surprised to find Sue on the other end of the call. As soon as she calmed down enough to tell me what was going on, I listened to what she had to say. It turns out that things died so quickly after we left Hugo's that Walter had a chance to look through Star Shadows II and liked it, particularity the Chekov story. So much so that he attempted to get in touch with us after we had left Hugo's. We were eating.

As a result of this however, I wrote a letter that was for warded to Walter. He was kind enough to respond with a letter of his own. To say the least, upon noting the return address of the letter I was flabbergasted. I never quite expected a response to my letter, Nice things like that just don't happen to me.

Nonetheless, a nice thing like that did happen to me. All due to the kindness of one Mr. Walter Koenig. He was sincere and warm, and someone I wish I could get a chance to talk to.

Walter, wherever you are, thank you, you're beautiful...