Tales from the Litterbox 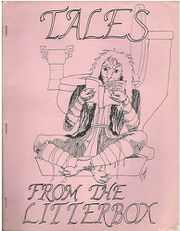 Tales from the Litterbox is a het Beauty and the Beast anthology. Zapf is the cover artist and Melody Rondeau did the other art.

It is fairly furry.

"Dedicated to: All those who are realistic about their fantasies." -- from the zine.

Tales from the Litterbox 1 is a 60-page satire and was published in 1988. It was edited by Sherri and Sandi Hawke. Authors are Sherri Hawke, Sandi Hawke, Bill Hupe, Michelle Hupe, Melody Rondeau, and Zapf.

Read the true origins of Catherine's and Vincent's beginnings — not the whitewash CBS fed us! Read about their marriage, children, and Vincent's passion for catnip. A truly delightful romp, not for anyone who will be offended by a satirical look at the show!

Don't panic, this will be short.

Looking back, this thing didn't end up at all the way it started out. We haven't decided if it's for the better or worse. Probably for the better, we aren't insulting near as many people as we set out to. We probably won't try another B and B story, at least not for a long time, there are only so many different scenarios.

Without Bill, this would have gone nowhere.

We checked printers ourselves, and had initially decided upon a first run of...ten. Which would have been just fine, because we might have sold five, and that would have left three to give away to people we didn't think much of.

Now that Bill's helping, we can print twenty, and Bill can give ten away to people he doesn't think much of.

Anyway, this is getting long so I'll give up now. Hopeyouenjoyourfirstlitter. Commentsare appreciated and might be printed in any future zines.

Don't choke on any furballs, Sandi and Sherri.

We would like to thank Bill, although the man is obviously insane.

We would also like to thank the University of Michigan for having several hundred LaserWriters in its possesion.

And last but not least, Melody Rondeau, for her always fantastic illustrations.

This zine shouldn't have cost you more than $6.00.

An irreverent Vincent/Catherine parody zine. Catherine has: a German Shepherd named “Killer” and a tomcat felinoid named Vincent. Vincent, in turn, has: whiskers, a tail, no morals, foul language, a habit of getting high on catnip and then throwing up, and a distinct resemblance to “Fritz the Cat.” He's not litterbox-trained, either. Reviewer called it the Andrew Dice Clay of B&B zines. Aims to annoy, amuse: succeeds. The romance-allergic may find it likable: there's wit here, for the strong stomached, and the writing is competent. The interior cartoon-style art (by Melody Rondeau) is wicked and witty, given the story's premise. [1]

Catherine calls him 'Furball'; Vincent refers to himself as 'Rambo Kitty.' You get the picture. [2]

Discover the true nature of Vincent's and Catherine's relationship in this humorous, 70 page novella. Read about their marriage, children, and Vincent's passion for catnip. A truly delightful romp; not for anyone who will be offended by a satirical look at the show! [3]

Tales from the Litterbox 2 was published in February 1993. It contains a 70-page novel called "Tales" by Gamin Davis. It has a full color cover by TACS and additional fiction by Louann Qualls, Spiderman crossover by Anne Davenport; additional material by Michelle Perry, Teri Sarick, Cindy Brink, Jenny Bozovic, and others. It was edited by Peg Kennedy and Bill Hupe. 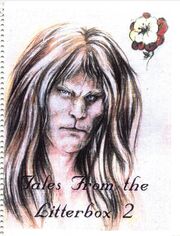 Not satirical, like the previous volume, this anthology zine seems more like an introduction to B&B than an exploration or extension of its themes. Parts are multimedia (mixing B&B with characters from other series). In Teri Sarick's anecdote "Tunnel Child," the titular child muses on what it means to be rich. In Anne Davenport's "Cat's Parlor," V has a fairly humorous run-in with Spiderman. Louann Qualls' brief "Lion in the Park" involves V with a Timelord (Dr. Who) named Aslan. The substantial novelette "Project: Prototype" by Gamin Davis, deals with V's origins as ex-Nazi doctors' experiment in breeding a master race. In all of these stories, V's relationship to C is acknowledged, but not the focus. It gives the stories an oddly distant air. But the writing is competent and the storytelling moves right along. Multimedia fans may enjoy this more than those whose fascination extends only to B&B. [4]