High Flight is a gen 76-page anthology and is a memorial zine and charity zine. 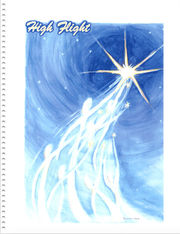 The art is by Hindman. According to the publisher, "All offerings in this zine are focused on the Columbia Shuttle’s tragic end, or space flight. A donation from each zine goes to the education fund for the Columbia astronauts’ children."

The art is by Joyce H. Hindman, Kat Ross, and June Lynn Roe.

Well, here we are.. Another charity and memorial zine. I can honestly say I had hoped this would never be necessary again. I'm sure you all feel the same way.

Unfortunately, on February 1, 2003, 7 brave men and women gave their lives to bring us knowledge. They left behind families - mothers, fathers, wives and children. This zine is to honor both the heroes who died, and the families who lost them. All proceeds from the zine will go to the Space Shuttle Children's Fund, which was set up after the Challenger tragedy to provide educations for the children of those astronauts. When that purpose had been served, instead of closing the fund, its administrator had the foresight to realize the painful truth, namely that the Challenger Seven were not the first and would not be the last to give their lives to make ours better. He kept the fund open, despite efforts by others to change his mind. His wisdom, unhappily, is now bearing fruit. I'm sure he, like the rest of us, wishes things were different.

There are people out there who do not understand the need for a space program, or see the reason for our grief. To them I say, read this. See things through our eyes. Realize our need for heroes, and our yearning to leam new things and see new places. Understand that any death, any loss of discovery, diminishes the human race as a whole. And then mourn with us.

To those who have contributed, and to those who are purchasing this zine, I say thank you. You already understand what's at stake here, and you're doing what you can to fight for our future, much as the Columbia astronauts were fighting for our future.

And when I say "our future", I'm not just speaking of the United States. I'm talking about the entire planet. It's an inherent need in humans to explore, to find new frontiers and new boundaries. Our next frontier, our newest boundaries, are in space. We must push on, we must continue, or all the lives lost in the quest for knowledge will have.

So if you know someone who doesn't understand the importance of exploration, who doesn't know about the difference it's already made in our everyday lives, lend him (or her) this zine. Show them what it's all about. And moum with them when they start to cry.