Orion Archives: 2229-2265 The Beginnings is a gen and het Star Trek: TOS anthology that reprints content published in previous Orion Press zines in particular from Orion. Some of the later issues also reprint online fanfic. The early issues are numbered, later on the titles are organized by the fictional timeframe the zine takes place in (many Orion Press zines take place in a vaguely shared universe at least as far as the basic chronology of the Trek universe is concered. Their website offers timelines and such that the zines adhere to). Issues are still being released as of 2009, and there are also re-releases of older Orion Archives issues. A full list is available at the Orion Press website.

Summary from the flyer: "These stories either feature the Star Trek characters featured in The Cage (such as Captain Christopher Pike, Number One, Lieutenant Spock and Doctor Phillip Boyce) as well as stories about the characters from Star Trek: The Original Series (including Kirk, Spock, McCoy, Scotty, Sulu and the others) but set before their tour of duty on the Enterprise, ranging from a young Spock to a teenaged Jimmy Kirk to Sulu's first mission to an alien world." 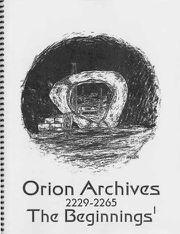 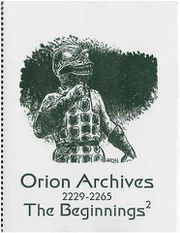 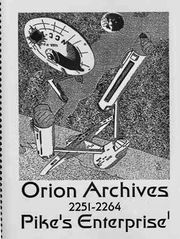 These stories either feature the Star Trek characters featured in The Cage (such as Captain Christopher Pike, Number One, Lieutenant Spock and Doctor Phillip Boyce) during their tour of duty on the Enterprise. 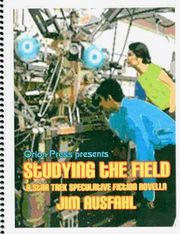 Orion Archives: 2229-2265 The Beginnings 4 contains 106 pages and a novel called "Studying the Field" (also called "Orion Archives: 2166-2170" by Orion Press. It is an excellent speculative fiction look at how these breakthroughs are in fact well grounded in science and engineering. Note: Though set in the Star Trek universe, this story does not feature any of the Star Trek characters.

A novel by Jim Ausfahl. There are several things that are accepted without question in the Star Trek universe that the series never really explains: dilithium crystals, for instance, or trititanium, or the apparently limitless supply of antimatter that seems to power the 23rd century. Although Studying the Field is not primarily a story about explaining these things, the development of the plot line provides an explanation of that and more. The story itself is about the interaction of two childhood friends who find each other at graduate school, and the fruit of their friendship.