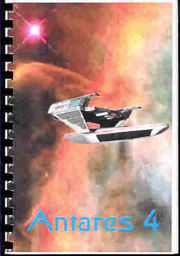 cover of Antares 4 by Rick Endres

Rick Endres has been writing fan fiction and illustrating and editing fanzines since the late 1970s. After publishing Where No Man Has Gone Before, Rick began working with Orion Press in 1979 and has continued editing and publishing to this date.

In a 2006 interview with the online magazine Trek Core, Rick made the following offer to its readers:

"Give fan fiction a chance, folks. Come visit our Orion Press website and check out any three stories. If you don't find any of them worth reading, well, accept my apologies. But you might open a new door, a new avenue of entertainment to you, one that you might find yourself wanting to be a part of. And believe me, we would welcome you."[1]

Rick's younger brother, Terry Endres, was also active in Star Trek fandom,[2] and the two were co-editors for Where No Man Has Gone Before.